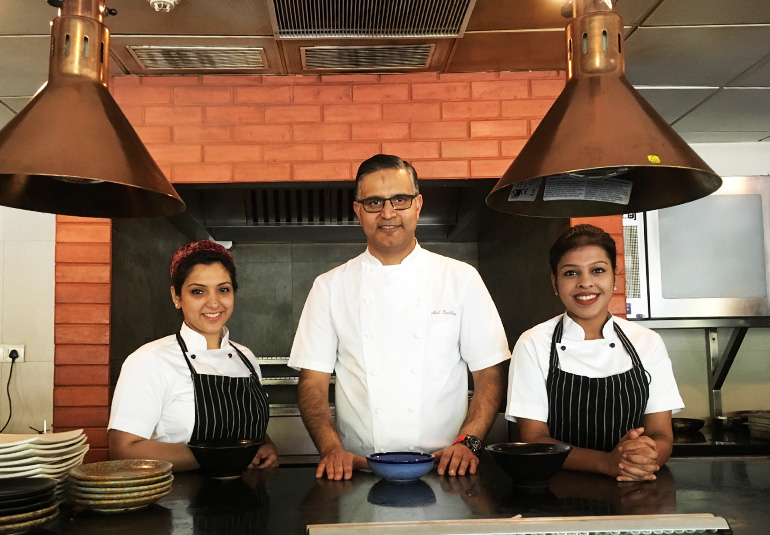 Monday started on a good note as we landed up at NRI BKC for a unique pop-up hosted by twice Michelin-starred chef Atul Kochhar and MasterChef India 2016 winners Kirti Bhoutika and Ashima Arora.

Here are the excerpts from the fun Facebook Live chat.

Chef Atul Kochhar: The feeling was obviously great and it took quite some time for it to sink in. I always believed that Michelin stars were meant for European restaurants. But it’s good to have broken the norm and there are around six to seven of us who are in that league today. There are many more chefs joining from other parts of the world.

What was the first dish that you ever cooked in your life?

Ashima Arora: It was a chocolate cake. I was in standard 10 when I first baked it using my Mum’s recipe.

Kirti Bhoutika: Chocolate cake! But I have had quite a few kitchen disasters. Some were sunken in the middle and some were rock hard. But after watching recipes on YouTube, I cracked the first dish that I made.

How do you visualise a dish?

AK: It often starts with an ingredient and the thoughts come through. After a point of time it becomes a lovely irritation because you have to put it on a plate! For instance, in a few weeks I will have wild salmon and asparagus to experiment in London, and I am already thinking what I can make with them. I constantly borrow ingredients, use them shamelessly and make them my own. I think that’s what a chef should be. There should not be any borders for chefs!

How important is presentation?

AK: When I started my career, there was no such thing. Especially with Indian food, which was served by slopping the curry on the plate along with rice or bread. I think I was one of the first breed of chefs who said that presentation is equally important. This is because we eat with our eyes first. A lot of people thought it was crazy. I resisted since I wanted to experiment with presentation. We were one of the first restaurants in London who started doing it, and others followed suit. But, today, presentation is everything and it is part of the experience.

Kirti: It is challenging when you are pressed for time, otherwise it is a beautiful thing decorating the plate. Especially on a TV show when people can’t taste the food, they judge our performance by seeing the dish. So for us it was very, very important.

Ashima: There was a lot of pressure in the MasterChef kitchen as we had to cook good-looking dishes. But it’s not just about that. It’s also about creating dishes that tantalise your senses, so yes it plays an important role.

What is the one kitchen skill that you will never forget in your life?

Kirti: For me it has to be making hoppers. I have always eaten them and wondered how they are made. I am glad that I learned it in this kitchen.

Ashima: Making food in the tandoors is one skill that I am happy about learning in this kitchen. Although my mum would cook in a tandoor, I was quite scared of going near it. So I finally made some tandoori rotis and also burned my hand. I also learned to use the Siphon gun in a more creative way.

How was your Masterchef India experience?

AK: It was fantastic. Watching a show sitting on the sofa in your home and actually being there is hard work. Spending three months on the show must have been tougher than the kitchen for them. I was quite chuffed to find the quality of food that everybody on the show was putting on the plate. I have been quite dismissive about MC India for quite some time, but after going on the show I kind of became a fan. I am a promoter of MasterChef India now!

My idea of bringing Kirti and Ashima here at NRI was not to let them disappear again. And my attempt is to keep pushing them and make them stay in the cook’s world.

How has MasterChef changed your lives?

Ashima: It has changed considerably. There are many who come up to me and recognise me saying they want to learn from me. Back home my parents are extremely proud of me, and I couldn’t have done it any better. I feel I have broken all barriers!

Kirti: More than me, MasterChef has changed me as a person. I am a much more confident person today. The journey from being a home cook to a chef is an evolution.

What qualities did you see in Kirti and Ashima to intern under you?

AK: They are all fantastic talent. Since the entire bunch was young, it gave me immense hope. And then I got in touch with them and asked them “let’s cook together” and “keep in touch”. I also told them if they need to help them to enter the industry, I will be more than happy to. When I mentor someone, I gain equal amount in return.

What are your 3 favourite ingredients?

AK: My mother, wife and my kids!

Cooking on TV or cooking in a restaurant kitchen?

Kirti: Cooking in a restaurant kitchen

What is the most underrated Indian dish?

What is the spice that best describes you?

Vox Pop: Will You Install UberEATS?

World Vegetarian Day: Is Vegetarianism Going To Save The Environment?

6 Best Indian Vegetarian Curries That Are Easy To Make