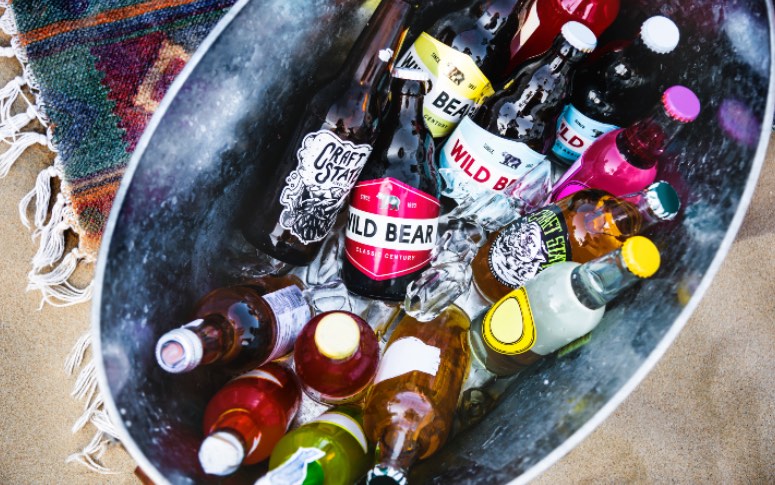 From hearing stories about one day owning a beer bar to manufacturing their own beers, from owning beer collectibles like a prized-possession to believing that beer is the best kind of alcohol, you've come across beers drinkers who've professed their undying love for beer. Beer is not the answer for them, it's a question to which "Yes" is always the answer. They're the ones who celebrate anything and everything with beer. Which chakna goes with what kind of beer, is the domain they're great experts in. We bet you know at least one type of beer drinker from this list who considers beer as bae and they're not (won't say) sorry for loving it so much. Stand up please! Yes, we know who you are. #InternationalBeerDay

1. The one who loves chugging beers.

Chug, Chug, Chug! And, that too without dropping a single drop, because why waste beer, right? They quench your thirst with beer and taking it slow is not in their beer dictionary. They love taking up chugging challenges and come out a winner almost every time!

2. The one who knows everything about beer.

They flaunt their beer knowledge every-time they're out with friends. They can exactly tell you the difference in beers just on the basis of its colour. Some of them are so good that they can tell the difference in the beer brands without looking at the labels. Often they ask questions like, do you know the difference between lager and ale? and so on. If you need beer suggestions, they're definitely the ones who come to your mind.

3. The one who lights up at the very mention of Beer.

4. The one who forcibly drinks to accompany friends.

They're the ones who just like to be in the company of friends and drink what their friends are drinking, although they don't enjoy it very much. After every sip, they'll be making a face which they clearly try to hide but fail to do so.

5. The one who can outdrink everybody.

They are the ones summoning the bar tender, 'one more, please!' They are basically the fish in the sea; put them in a beer tub and still they'll be complaining about not having enough. No one in your friend circle can compete with them because it is home run for them, aakhir beer ka sawal hai, and it only goes to show that indeed it's true love for them.

6. The one who travels for beer.

You make your plans around beer, be it within the city or out of the country, be it 20 kms away or 1000s, be it the American beer festival or Oktoberfest, beer festivals make them super excited. And, more often than not, you're the one being dragged along too for all those beer outings. They know exactly which bar in the city has what kind of beer and don't even get them started about the draught beers. If moon had beer, probably they'd be planning a trip there too.

7. The one who has a beer belly but doesn't care.

The very infamous paunch on men is considered as a beer belly and however much they hate to admit it, we all believe it's because of all those beers they've been chugging down at social parties and gatherings. Some of them really don't care and pretty much take it in a stride when teased about it.

8. The one who gets drunk on one beer.

We all know 'the one' who gets tipsy after a pint and let's not even get started with what follows. They're often called light-weights by friends too. The drama queen in them comes out; they're either tripping all over or talking too much, either swaying away to glory or are just happy high! But, on one beer? It's difficult to fathom for others around them, especially the ones who don't get drunk with beer at all.

9. The one who drinks beer at a tortoise' pace.

Well, they are just slow. Sitting at a bar and taking it slow is their idea of fun. They stick to sipping slowly and dwell on one pint of beer like a lingering thought. Many people confuse them for being chindis, or tight-fisted but that's often not the case.

10. The one who hates if anyone messes with beer.

Who the hell does that? They're the ones who say, "No beer cocktails, please!" They are the ones who can't tolerate mixing beers with anything because it's a sin to dilute the taste of beer. They believe in keeping the sanctity of beer rather than polarising it with flavours and crazy inclusions.