50+ Best Mithais From Across The Country

The festive season has officially begun, and we can't keep calm 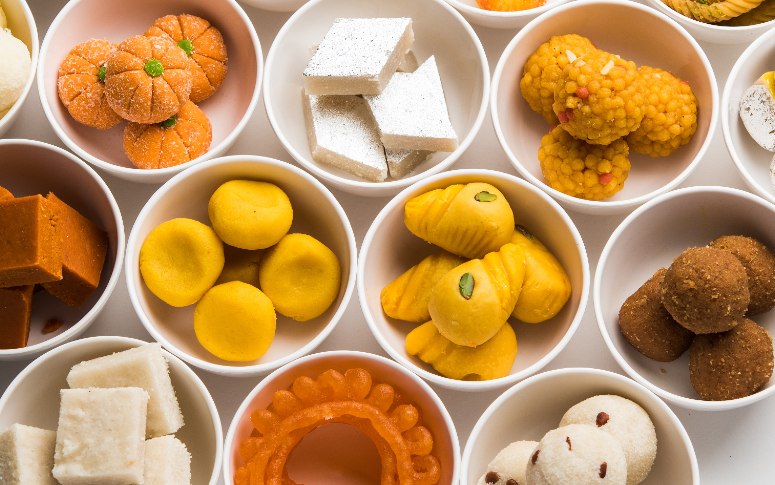 Indian festivals and occasions are incomplete without mithais and Indian desserts are arguably one of the sweetest but delicious treats that one simply can't resist. Mithais are just not sweet treats, but an emotion, an indulgence for joyous moments and a celebration for new beginnings.

So, here's an introduction to the types of mithais that are popular across the country and some that are regionally famous.

A Mughal inspired dessert that is popular in Hyderabdad; it is made with deep-freid bread, topped with thickened flavoured milk, saffron and milk.

A square milk cake made in several parts of the country with two basic components- milk and sugar and is then formed into a barfi with nuts as a garnish.

A diamond shaped cashew barfi laiden with vark or silver edible foil on top is amongst India's most-loved mithais of all times.

It is a soft brown, deep fried ball, made with milk solids and dunked in a rose water sugar syrup.

A round-shaped white to off-white in colour, this dumpling is made up of chhena and semolina, which is then cooked off in a water based, sugar syrup.

A popular sweet from Uttar Pradesh, balushahi looks very similar to glazed doughnut in terms of ingredients, but differs in texture and taste.

It is an apricot based dessert enjoyed in the state of Andhra Pradesh on special occasions like weddings.

Popular in the state of Karnataka, Mysore pak is made using generous amounts of ghee, sugar, gram flour, and often cardamom.

Made with condensed milk and not, this coconut based ladoo is devoured in several states in the country like Assam, Maharashtra and Gujarat.

Similar to kalakand, this khoya based sweet comes wrapped in a Maalu leaf and is a go-to dessert for people in the region of Kumaon in Uttarakhand.

It is a thin spirally mithai made from flour, which is then deep-fried and dunked in coloured sugar syrup is what a perfect jalebi is all about. It is also referred to as Jilapi, zulbia, mushabak and zalabia in the Middle East & South Asia.

Often called Khajjaka, it is a flaky wheat flour preparation fried in ghee. Coming from the Oudh region near Agra, it is a Diwali special recipe that can be made in both sweet and savoury versions.

A popular Goan recipe, it is a traditional Indo-Portuguese dessert with seven layers. The ingredients used to make this dessert is flour, sugar, ghee, egg yolks and coconut milk.

A Rajasthani sweet made especially on the occasion of Teej Festival, it is a disc-shaped sweet cake made with maida and soaked in sugar syrup and often garnished with cream and nuts.

Mostly eaten in the states of Gujarat and Maharashtra, it is a sweet thickened milk, flavored with cardamom and nutmeg, garnished with dry fruits.

Peda or Pera is a sweet dish made of khoya, sugar, cardamom & nuts, hails from originated from Mathura. Often, its flavoured with saffron.

It is a rich North Indian mithai made by stuffing a mava dough with a rich mixture of nuts and mava; it is then deep-fried, until golden brown. Soaked in sugar syrup, it is often served warm.

A famous mithai eaten during Ganesh Chaturthi, this Maharastrian sweet is traditionally steamed and made with jaggery and coconut filling called Ukadiche Modaks. It also comes in a deep-fried, not steamed formed too.

An Odiya favourite, this mithai is well-kneaded homemade fresh cheese chhena with sugar & is then baked for several hours until it browns on the surface and edges leaving a soft, goeey centre.

A hung-yogurt recipe that is very famous in the states of Gujarat & Maharashtra. Mango shrikhand or Amarakhand is a summer special in these states.

Also called Valsan or Elayappam, it is a traditional sweet eaten in the state of Kerala. Made with rice flour, coconut-jaggery filling and then steamed wrapped in banana, it is often prepared during festivals.

A freshly crumbled paneer and powdered sugar dessert sweetened with sugar is what the city of Kolkata is famous for.

A traditional kheer recipe made from black rice is an authentic Manipuri delicacy. Its unique flavour and nutty taste makes it an aromatic and flavorful dish.

Punjab's version of a bliss ball, Pinnis are mostly eaten in winters for a nutritional benefit. Made from desi ghee, wheat flour, jaggery and almonds, it is packed with a goodness of health in every bite.

Ladoos is a term referred to a sweet roll out by hand in a round shape. The most popular ladoos eaten in India are that of Besan, boondi, also called the motichoor ladoo, Gond ladoos during winters and coconut. One can make a ladoo out of practically anything like seeds, dates, semolina etc.

A traditional, sweet ring-shaped rice bread originating from Nepal is made during the Hindu festivals in Nepal, Sikkim and Darjeeling regions.

A cube-shaped Indian dessert that is flaky and sweet is made from flour, sugar and cardamom. It becomes a popular mithai to gift friends and family during the festive season.

A type of kheer, it can be prepared using bulgar wheat, millet, tapioca, vermicelli, or sweet corn. It has a creamy texture and is made with powdered rice, milk, almonds, saffron and cardamom.

A popular Himalayan sweet from the region of Kumaon, Bal Mithai is a brown chocolate-like fudge, made with roasted khoya, coated with white sugar balls.

A traditional Kashmiri dessert made during festivals and weddings is nothing but a mixture of various dry fruits, spices and sugar syrup.

Halwa is a term used for pudding-like desserts, amongst which sooji, atte and gajar, lauki, beetroot, buckwheat etc fall under.

A paneer based dessert that is dunked in the richness of creamy, saffron-flavoured milk and garnished with chopped nuts. It is often served cold.

It is an Indian pastry-like snack ceaten on Diwali in the states of Bihar and Maharashtra. Made with jaggery, rice, poppy seeds and ghee, Anarsas are a pure delight.

A deep-fried fritters recipe from Mizoram, this recipe is easy-to-make and can be prepared at home without putting in much efforts and resembles Kerala's Unniyappams.

A Meghalayan sweet made with rice flour and water is literally a two-ingredient recipe that is most enjoyed at tea time with a hot cuppa.

Also referred to as the Mahim Halwa, is a paper-thin, melt-in-mouth squares topped with crunchy nuts as a garnish.

Made with flour, eggs, butter and sugar and shaped into different shapes and sizes, this deep-fried snack is an Arunachal Pradesh dish, inspired by the Tibetan cuisine.

A sweet fried rice dumpling from Chattisgarh is super easy to make at home with rice and curd, being the two hero components of the dish.

This traditional gram flour or besan fudge dessert from Gujarat is a melt in the mouth recipe that uses generous amounts of ghee, sugar and nuts.

A popular Assamese dish, monda pitha or mohura pitha is made with a sweet filling of coconut & jaggery or savoury filling with spicy potatoes.

Looks very similar to jalebi, Imarti is Bengali sweet made by deep-frying lentil batter which is then soaked in cardamom and rose flavoured sugar syrup.

Malpua is a pancake served as a dessert and is often paired with rabdi. It is either made up of a flour batter or paneer dough, depending on where you're eating it.

It is a crispy Bengali stuffed and deep-fried pastry, soaked in sugar syrup.

A long cylindrical sweet made by kneading paneer with khoya to form a melt in the mouth spongy case which is then sometimes stuffed with mawa, depending on the variation you prefer.

Another baked Bengali sweet made by evaporating milk with curd culture and jaggery or sugar.in a clay pot and then allowed to set

A south-Indian version of kheer, it is a delicious, creamy, rice and milk pudding with cashews and raisins.

Looks like an elongated Gulab Jamun, it is a light fried reddish-brown sweet ball made of paneer and flour and soaked in sugar syrup.

Originated in Gujarat, Doodhpak is a rice pudding made from milk, rice, saffron and nuts. It often savoured with pooris at lunch time.

A traditional Bengali sweet made with cream of pure milk. It is a Dussehra special mithai that is brown in colour on the outside and creamish when you bite into it.

A quintessential festival recipe, made with vermicelli, milk and dry fruits. It can be made in both sweet and savoury versions.

A popular Gujarati sweet that is shredded and flaky. It is made with rice-flour roasted in ghee, which is then blended with melted sugar to form a cotton candy and is finally topped with finely chopped pistachio and almonds.

Just like Patholi or Pitha, Patishapta is a thin crêpe filled with either kheer or a coconut & jaggery mixture.

Also referred to as Gujiya, this sweet version is often stuffed with a coconut and jaggery filling, parcelled in a crispy, flaky pastry.

Pranhara or Kacha Golla is a panner sweet delicacy from the city of Kolkata. Looks a lot like rosagulla, this dessert is not cooked after its formation, instead, it is rolled in milk powder.