6 Regional Ways To Add Tadka In Your Food

Tadka is what adds taste to Indian food. The dal you eat, the bhindi sabzi that you make all requires different types of tempering that makes your eating experience even better. The Hindi word chhaunk was or tempering comes from the sizzling sound of the spices that it makes. It also called poron in Bengali, thaalithal in tamil and thalimpu in Telegu. True flavour can be added to your food when you use different tempering techniques made in ghee or oil. Here are 6 different regional ways to add tadka in your food.

Mustard seeds, curry leaves, hing, and red chillies are typically what's used for a South Indian tempering. A lot of times chana dal is also added which adds aroma and flavour to the food. They are usually tempered in coconut oil or ghee. You can use this tempering technique for dishes like cucumber raita, curd rice, and coconut chutney.

This literally translates to 5 spices. This is tadka that's used in common Bengali dishes. It is a mix of spices like fennel seeds, carom seeds, fenugreek, onion seeds, and mustard seeds. This is only tempered in mustard oil. This tempering can be used for dals, mutton or fish curries.

In households where you don't eat a lot of onion and garlic, the essence of the food comes from masalas. Jeera seeds, fennels seeds and hing is something that's trusted to add a little more flavour in food. This tadka is especially used in dals.

In Gujarati Tadkas it is common to put Haldi, thing, crushed ginger and chilli paste and tomatoes which adds colour to the food. You can put this tadka over the famous Gujarati dal or even dry sabzis.

Kashmiri Tadka consists of garam masalas like cardamom, cinnamon, black pepper, and bay leaves. This tadka makes your food spicy and gives your food a little texture and edge to your food. Use this tempering for your curries and dals.

Punjabi tadka is made with tomatoes, onions and green chillies. It's spicy and full of flavour which makes even the blandest ingredient exciting and yummy. You can add a little ginger to add some zing to it. 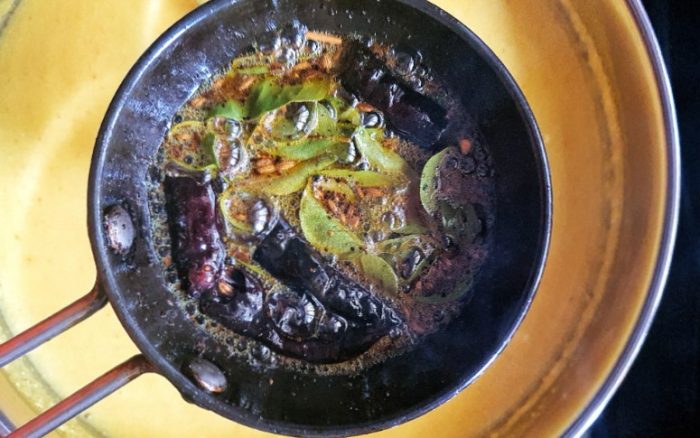 The key is to put all the flavour in the tadka and then mix it with the main ingredient. Make sure you don't burn the tadka, you'll know by the smell of it. Garnish the dish with coriander and your dish is ready.