Cheese Guide: Types Of Cheese You Should Definitely Know About 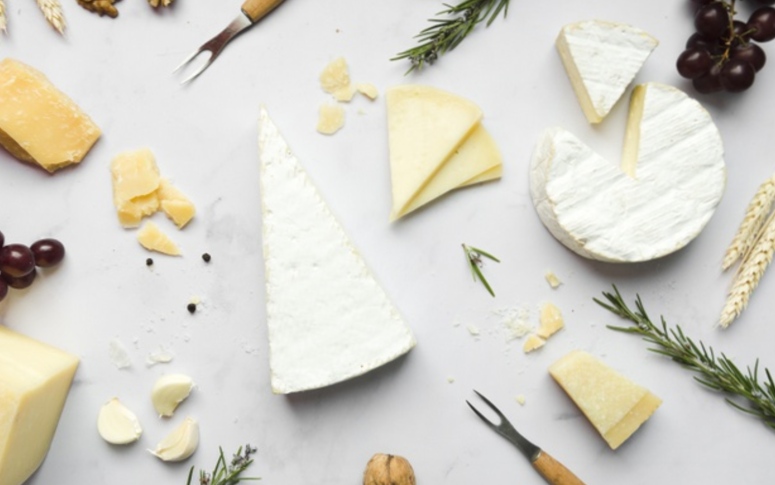 "Yes, some extra cheese, please," says everyone ever. What would we have done without cheese? But, let me tell you, (if you didn't already know it) that cheese happened to mankind by accident & aren't we lucky for that accident? A herdsman accidentally stored milk in a pouch made from the stomach of a goat. An enzyme called rennet that is found in the lining of a goat's stomach caused the milk to coagulate, thus separating into curds and whey. And, as they say, rest is history.

Using this technique with just 3 ingredients- milk, a microbial culture like rennet & salt, thus many cheeses were born. The type & quality of the cheese usually depended on: the region, the temperature it was made in & milk (full fat, low fat, goats milk, cows milk, sheep's milk, buffalo's milk etc).

Furthermore, the textures, age & flavours can classify cheeses into 9 categories:

Now, let's dive deeper into the world of cheese with some popular & not-so-popular types of cheese you must know about:

One of the most popular and loved cheese in the world is mozzarella. If you're a pizza lover, this has to be your go-to cheese. It originated from Naples on Italy from water buffaloes, making it a rich & soft cheese. It falls under the fresh cheese category, therefore can be consumed as soon as it is made, requiring no ageing at all. Cheddar cheese is a relatively hard, off-white sometimes sharp-tasting, natural cheese. Consuming this cheese is considered to be healthy; 30 gms of this cheese provides 20 percent of daily calcium requirement needed. Cheddar is one of the most versatile cheeses; from breakfast dishes to one-pot casseroles, to appetizers, it can be pretty much used anywhere. The sharpness of the cheddar depends on its ageing period. Straight from our childhood cartoon favourite, Tom & Jerry, we've imagined cheese to be in this shape & form! It is a generic name used for cheeses made in Switzerland. Why does it have holes? These holes are created by the bacteria that helps change the milk to Swiss cheese. The flavour of Swiss cheese is subtly nutty & sweet. It is known to be one of the healthiest cheeses as it has lower fat & sodium content than other cheeses. Also Read: How To Make The Ultimate Grilled Cheese Sandwich

Also a type of Swiss cheese, Gruyere is a perfect balance of sweet & salty, depending on how long it has been aged for. It is popular amongst bakers due to its balanced flavour profile and is famously used in fondues in restaurants across Switzerland. Originated in France, this off-white cheese made from cow's milk has a rich & fruity taste with a buttery texture. Due to it's creamy and rich flavour, it is one of the most preferred cheeses for sandwiches and to spread on crackers.

Being one of the most exotic cheeses in the world, Gouda has a strong flavour with a smooth & creamy texture. The older the gouda, the harder it gets, making it perfect for it to be paired with crackers and wine. It is easily distinguished from other cheeses due to its colour. The cheese is coated in wax or plastic and aged for anywhere between one month to over a year. Commonly known as Parmesan, it is very popular for it's salty, sour flavour, making it devourable with almost everything. Parmesan takes about 1 1/2 to 3 years to age and mature. It is the most preferred choice for chefs and cooks to turn around a particular dish. It comes in both, block & powdered form, making it easier to either grate or sprinkle it. Mostly pale yellow in colour, it is usually grated on dishes like spaghetti, Caesar salad, and pizza. Just like Swiss cheese, Emmental, is a variation under the broad term. It is hard in texture with a fruity flavour, making it perfect to be had with a glass of red wine. It also is one of those cheeses that melts beautifully and is used to make the famous Swiss fondue. This cheese needs no introduction to salad lovers. It is crumbly, salty and best had with fresher produce like watermelon & arugula leaves. It tastes delicious on a pizza, sandwich or even baked potatoes. A thick, luscious cream-like texture, this cheese is widely popular in Italian desserts like tiramisu and sweet cannellonis. It is also one of the fresh cheeses that need to be consumed faster otherwise it could taste sour. It is often compared to cream cheese but it's a higher fat content than the normal cream cheese.

A type of blue cheese, this sheep's milk-based cheese is white with speckles of blue mould. It is crumbly, moist & has a distinct odour and flavour. It is definitely one of those cheeses that is not loved by most. It is aged for 5 months. It is also mostly used in salads and dressings. Also Read: Why This Is The Best Grilled Cheese Sandwich In Mumbai

Almost the same flavour profile as Brie, Camembert tastes better as it ages. Young Camembert has a milky & sweet taste and as the cheese matures it forms a smooth, runny interior and a white bloomy rind around itself. A Spanish cheese, Manchego is made with goat's milk and roughly takes about 3-12 months to age. This cheese in its nascent stages tastes fruity but once aged completely has a rather sweet flavour. Manchego has a firm consistency with a butter-like texture. Manchego cheese is best served with olives, olive oil, sun-dried tomatoes on toasted bread. It is an American, semi-hard white cheese made from cow's milk that can be flavoured with herbs & spices. It is the second-most popular cheese in America after mozzarella as 1 American roughly consumes 30 pounds of this cheese every year! This cheese takes about 3-8 months to age. Made from goats milk, this cheese has a soft texture with an earthy & tangy flavour profile. It is an easily spreadable cheese and can be eaten by slathering it on a toast with a generous amount of olive oil & herbs. It can also be excellently paired with wine, honey & dried nuts, specifically, walnuts. Another blue cheese, Gorgonzola is made from unskimmed cow's milk. It has various textures, from buttery to firm or can be quite crumbly too. It is inherently salty with a pungent flavour, making it one of those cheeses that are meant for acquired palettes only. This cheese can be added to pastas, savoury bakes, & is most commonly used as a fondue sauce too! Made from cow's milk, this cheese is made with the pull & stretch technique. It is generally aged for 2-3 months giving the cheese its mild and smooth flavours. It is most commonly grated on salads and used to make grilled sandwiches. Burrata is like an explosion of flavours in your mouth. The exterior looks pretty much like mozzarella cheese but it's the inside that sets it apart. It is a fresh cheese and can be consumed as soon as it's made without any ageing process involved. It is fresh, mild in flavour and springy like a soft pillow when you tuck into it. Made from cow, water buffalo, goat or sheep's milk, ricotta is one of the most commonly made cheeses at home by separating the whey from the curds. It is very similar to cottage cheese or paneer but uses cream in the process too. It can be used to make lasagna, ravioli or used as a spread with olive oil & herbs. A semi-hard cheese, halloumi is made from a mixture of goat's and sheep's milk, and sometimes also cow's milk. It has a high melting point and so can easily be fried or grilled. It is often-eaten as a meat substitute and can be really salty if eaten uncooked due to the brine in which it is cultured.