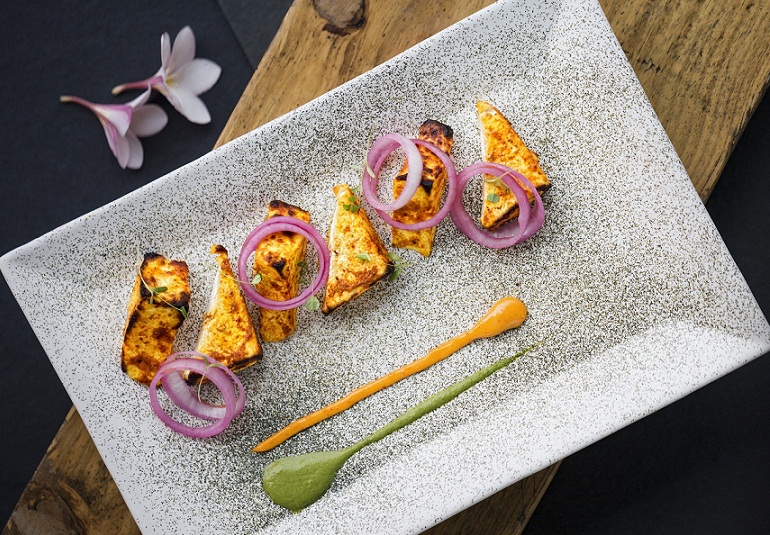 Epicures in Raipur, Pune and Jaipur have had good cause for celebration lately. Chef Ajay Chopra, Director, Zion Hospitality Pvt Ltd has lent his magic touch to three new theme restaurants – Iraa in Raipur, Pandora in Pune and Reza in Jaipur. While it has been nearly three months since Iraa and Pandora opened their doors, Reza is barely a month old. But if reviews are anything to go by, all three restaurants have done justice to Chopra’s reputation for culinary genius. We spoke to the Chef for more details.

What the names mean

“Iraa” means “earth”. The place where it has been built is called Swarnabhoomi and it’s full of greenery. The restaurant too had to reflect the nature-rich surroundings and the theme of the five elements of nature.

People usually relate Pandora to Pandora’s Box but it actually means “gifted”. The Greeks believe that we’ve been gifted so much. So when you come here, it’s like opening a gift box of food.

Reza (in Arabic means “particles”) is a galaxy of small elements, and that is exactly what is served with the most unusual amalgamations. The diversity of preparations at Reza brings together families, friends as well as acquaintances.

At Iraa, the focus is on the style of cuisine and cooking, such as the use of grills and steam baskets. The menu is a mix of popular cuisines like European, modern Indian and Asian. Signature dishes include stuffed morels with mushroom reduction and wasabi paneer tikka.

Reza boasts of international flavours with the age-old recipes of Rajasthan and across India. The menus are inspired by the incredible diversity of India’s regional cuisines, enhanced with a progressive touch whilst the soul of the food is retained with robust and authentic flavours. Signature dishes include shades of laal mass and batao crumble.

The look and feel

Iraa is classic, with different zones. The earthiness comes from marble and there’s also a lot of glass. Overall, the look is very grand.

Pandora is grey, international, upmarket and minimalistic. The various patterns on the walls are a take on the whole geometric aspect.

Reza has two defined areas – indoor and outdoor. The décor is modern and eclectic.

And in case you can’t make it in person, here’s a recipe for Chef Ajay Chopra’s Pithaud Cake with Masala Green Peas:

For the pithaud cake, whisk curd and gram flour together. Add turmeric and kadhai powder, salt and mix well (it should be thick like a batter). In a kadhai, heat ghee, add the above mix and cook on a slow fire. When it becomes a little thick and leaves sides of the kadhai, remove from fire. Take a 1-inch deep grease tray, add this curd mix and let it cool. Cut into round shapes with a mould and grill it for 2-3 minutes from the both sides.

For the kadhi, combined all the ingredients of the kadhi and leave it on fire to reduce it. When thick, turn off the gas and cool it. Arrange the pithaud cake with the green peas masala on top and kadhi. Garnish with orange zest, basil leaves, coriander and dill leaves.