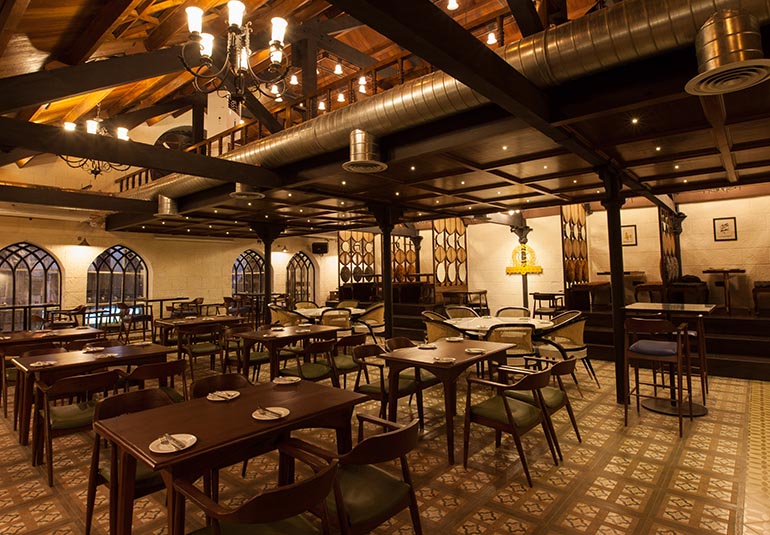 The colonial hangover at Gymkhana 91 is intentional. An old-style staircase with wooden railing, vintage tiles and chairs with cane backs, arch windows and a giant clock are meant to remind you of a time gone by at this new Lower Parel restaurant.

For the uninitiated, gymkhanas around the country are associated with British-era structures, friendly staff, familiar faces, good food and a ‘members only’ rule. Aditya Hegde wanted to recreate the same charm with his debut restaurant. After running a successful food catering business at city gymkhanas with his father, he wished to give Mumbaikars access to the ‘gymkhana life’. “I have not taken a day off for the past seven months,” says the young restaurateur. And the efforts have paid off. Just a week old, Gymkhana 91 aspires to be a bar and restaurant offering good food and drinks at affordable prices for anyone and everyone. Music and live gigs are also planned in the coming weeks.

The food menu is eclectic for there’s something for everyone. There are salads, dimsums, baos and sushi too! We started our meal with Kuber kulchas – soft, pillowy miniature kulchas stuffed with cheese and garlic. Being bite-sized, they were wiped off in seconds. We paired our appetisers with a delicious Nightingale Cosmopolitan and fresh orange juice. The Kale, Cucumber and Fennel juice was surprisingly sweet and refreshing too.

Since we were driving back home, we refrained from tasting the cocktails. But Aditya recommends the Tsar of Rus – a fascinating concoction of Vodka, Kahlua, cream and caramel, and Admirals Move – a spicy drink made with Vodka, lime juice and jalapenos.

Tempted to order for a second round of Kuber kulchas, we moved on to Rati Aunty’s Chutney Edu Pattice – an Indian version of Scotch eggs inspired by Aditya’s friend’s mom who is known for preparing them well. It reminded us of the Bengali dimer devil found at Kolkata’s street-side stalls and a favourite among office-goers post work hours. This one arrived in a steel tiffin box and had a strong hint of Indian spices; nothing exceptional though. The Naga Chilli Wings were crisp, but lacked any heat, which one usually expects from the chillies grown in the north-eastern state.

For mains, we chose the Massaman curry with roti canai and sticky rice. We were pleasantly surprised by the soft lamb shanks as they fell off the bone, and a luscious curry laced with coconut and cinnamon. The prawn crackers were an added bonus and yum.

The dessert menu boasts of the classic Caramel Custard, a Gymkhana favourite across Mumbai. It was silky and fantastic to say the least; Aditya also gave us a few tips to make it right at home. The Chocolate Volcano with Orange Zest is highly recommended too by the owner.

We hope to swing by at Gymkhana 91 for the thukpa, pork momos and the Russian cutlets with an appetite soon. Or to simply live the gymkhana life.

The author was invited by the restaurant for a tasting session.

Vox Pop: Will You Install UberEATS?