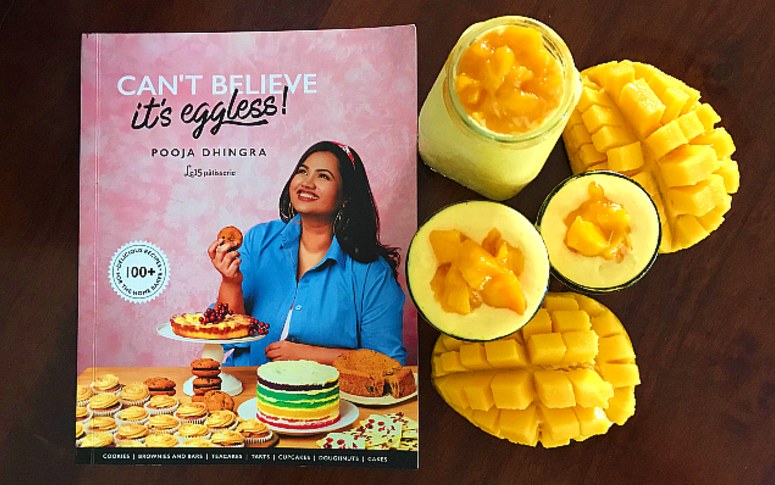 3For World Baking Day, I decided to attempt eggless baking yet again but this time with the help eggless dessert recipes from Can't Believe It's Eggless by Pooja Dhingra. Why I decided to go eggless and whether it was a hit or miss? Read on to find out. Like food, baking is a personal experience. My house wafting with the lemon-y fragrance of a freshly baked pie, my baking tools gleefully hogging a special place in my kitchen cupboard and a warm cake bubbling away in the oven is what baking means to me.

I cherish every bit of the baking process until India's infamous “eggless” phenomenon strikes with subtle dissuasion. In India, before eating any Western dessert, most people will ask "Is this eggless?" and follow it up with a double check, "Pakka na?"

Like everything else, India's appetite for Western sweet treats is a paradox too. Being a mostly vegetarian country, Indians crave Western desserts but want them eggless. If that's not all, they want their eggless desserts to taste as good as their with-egg versions.

While I have come to love baking in all its forms, I was constantly asked the same question, “Can you make it eggless?” which led to my never-ending hunt for good eggless dessert recipes despite a dozen failed eggless experiments. Some would come out of the oven soggy, some hard, some dense and some just tasted “not-like” the 'normal' cake!

Then Can’t Believe It's Eggless! by Pooja Dhingra happened. The cookbook, Pooja's third, which released in February this year, boasts 100 eggless dessert recipes. Finding out about the cookbook reinstated some of my hope to finally be able to bake treats for my family that doesn't eat eggs. When I finally got my hands on the cookbook, I couldn't decide which recipe to begin with. Since I was in a tropical mood, thanks to summer, I picked the super-tempting Pineapple Upside Down Cake recipe. Besides, I've always wanted to make this cake because it's so pretty.

For the next recipe, I wanted to go seasonal and what better than mangoes? So, I picked the Mango Mousse recipe. I also wanted to stock up on some sweet snack bites for office so I experimented with the Almond Rocks recipe.

The best part about Pooja's cookbooks are that the recipes always call for easily available ingredients. Phew! One task out of the way.

Baking is never a hunky-dory affair, especially if you're trying a recipe for the first time. So, first-time bakers, be easy on yourself. It takes a dozen (sometimes more) attempts to master a baking recipe.

The first step of the Upside Down Pineapple Cake recipe itself didn’t go as anticipated. I had to melt butter and sugar together to make a mixture. However, the sugar kept separating from the butter and cyrstalising into a hard sugar rock instead. I was determined not to give up so I repeated the same step thrice. Yet, the ingredients refused to behave.

Finally, I tweaked the recipe step a bit to suit me. I first melted the butter in a separate pan, then poured it in a tin and sprinkled castor sugar on it. This did impact the end result as the caramelisation effect that the recipe intended did not show in all its glory.

Another tweak I had to make to the recipe was to do with milk. The Upside Down Pineapple Cake recipe in Pooja's cookbook calls for 20 ml milk but I had to use more milk than the recipe demanded. It's only then that I achieved a pourable consistency for the batter. And here's how it turned out! Tip: Before unmoulding the cake from the tin, let it rest for at least an hour.

Except for the few glitches I faced that I overcame with my own tweaks, the Upside Down Pineapple Cake recipe turned out absolutely divine. My family and friends, including me, hardly missed the eggs. I'm certainly turning to this recipe the next time I'm craving cake.

Also Read: Have a problem with egg-based desserts? Try this eggless doughnut recipe!

Who knew a simple 3-ingredient recipe could work its mango magic like this, plus without much effort. With this recipe, the only thing that's tested is your patience (again!) while you’re waiting for the mousse to chill and settle to the right consistency.

Tip: Resist from opening the refrigerator for at least 2 hours and allow the mousse to do its thing before you can dig in to this sunny mangolicious goodness. Almond rocks are very close to my heart - I could eat them all day, any day. I followed Pooja's recipe to the T and voila! I had the yummiest stock of almond rocks or clusters ready to be stored in air-tight jars and enjoyed for weeks.

The only addition I made to this two-ingredient recipe was a sprinkle of sea-salt. I have a weakness for sea salt besides it elevates the flavour of chocolate in the most sinful way possible!

Tip: Let the chocolate clusters set at room temperature before storing it in the fridge. After the success of these three baking experiments from Pooja's latest cookbook, I am excited to try rest of the eggless recipes. One that caught my eye and tastebuds in particular was the Thums Up Cake recipe which also happens to be Pooja's family recipe.

Many of us may argue that baking is all about the magic in one's hands, while some may say it's about the technique. Is it about trial and error or is it just giving free reign to your creativity? Is it about the ingredients or purely the science of measurement and temperature?

I may not be able to answer all these questions but my baking endeavours have taught me that it's a little bit of everything. Most importantly, baking calls for an understanding of flavour and temperature.