Experience Seafood with a Mangalorean Touch at Ferry Wharf 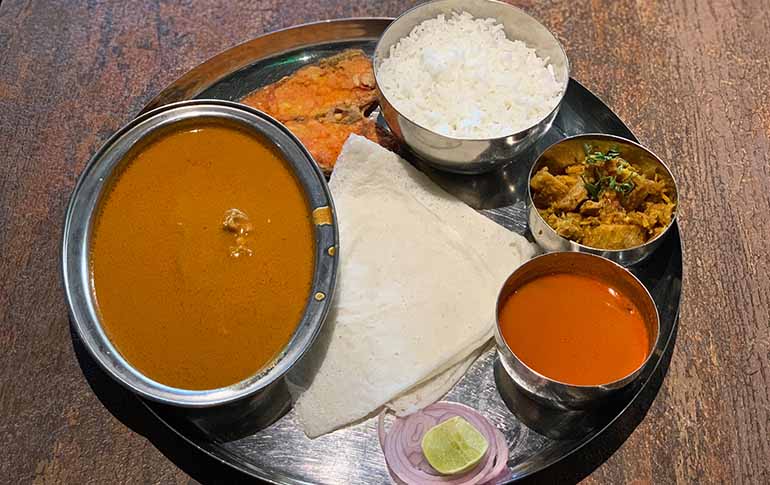 No points for guessing that Ferry Wharf is all about seafood. Tucked in a small lane in Bandra's Reclamation area in Mumbai, this quaint restaurant's menu offers popular seafood delicacies with a Mangalorean touch.

The Ferry Wharf menu also prods you to make some Mangalorean culinary discoveries, which was the eatery's founding vision. "We noticed that Mumbai had a lot of Malvani restaurants but very few that promote Mangalorean food as we do," says Prakash Rai, co-owner, Ferry Wharf.

Also Read: Go on this fish trail the next time you're in Goa!

Despite many Mangalorean treats awaiting me on the Ferry Wharf menu, I began my meal with Sol Kadhi. The sweltering hot Mumbai afternoon demanded the refreshing, pink drink which is a popular coolant in the country's Goan and Konkan regions. 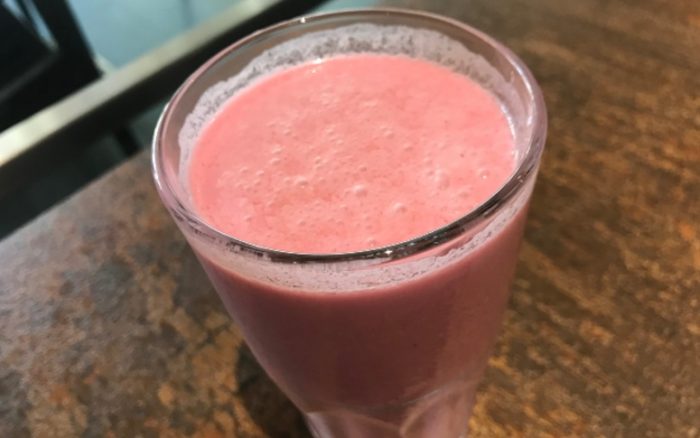 The concoction mixes the goodness of kokum, the richness of coconut milk with a hint of finely chopped ginger and chillies.

Flavour of the Day

Once you're settled in your table at Ferry Wharf, the wait staff bring to you what they call a 'Tasting Platter'. It comprises six different types of sauces in which their catch of the day is prepared. Once you've tasted them all and decided what flavour you're in the mood for, the staff will recommend which seafood tastes best with your choice of sauce. I found this a very novel way to make sure your guests are not disappointed with their meal! 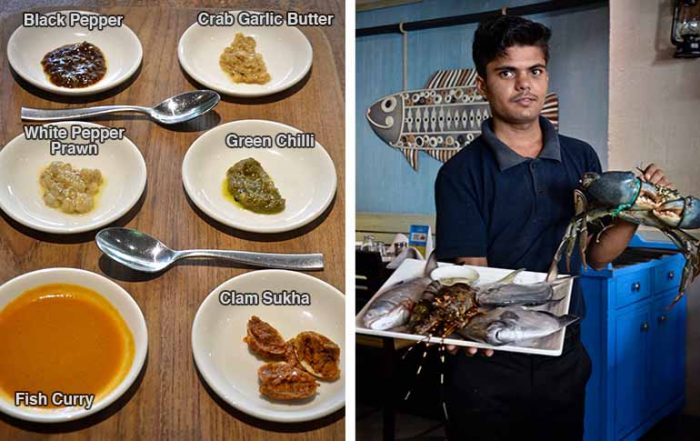 Catch of the Day

Next, our server brought to our table the fresh catch of the day. In one hand he had a tray that showcased different types of fish and he was holding a big, fresh crab in the other. Since I'm allergic to shellfish, I avoided the prawns and clams. Out of the sauces, my two most favourites were the Green Chilli and Black Pepper Sauce. I was told to try basa with the Green Chilli Sauce and squid in the Black Pepper Sauce.

Since I was already pleased with my choice of sauces, eating them with the seafood was an additional treat. 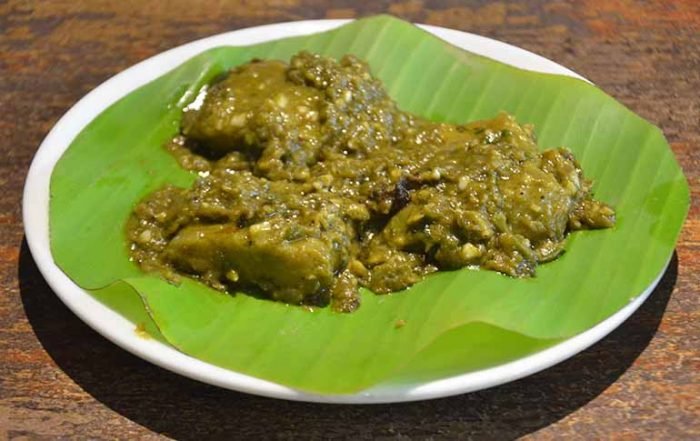 The basa in Green Chilli Sauce (worry not, it's not spicy like your typical green chilli) was soft, succulent and perfectly cooked. I had no complaints whatsoever. 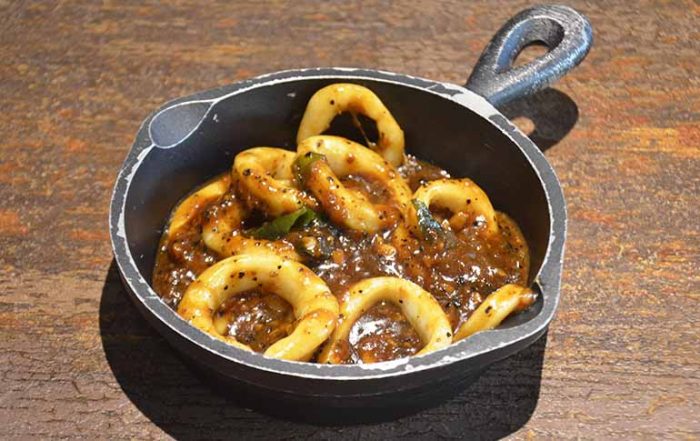 The squid on the other hand is a highly temperamental fish and can hardly be forgiven if not done right. The squid I had that day felt chewy and rubbery. However I was so satisfied with the Black Pepper Sauce that came with curry leaves, to give it the Mangalorean touch, that I simply mopped up all the sauce with Neer Dosas!

In the seven years that I've lived in Mumbai, I've heard so much about Bombil Fry that I was happy to finally try it for myself. 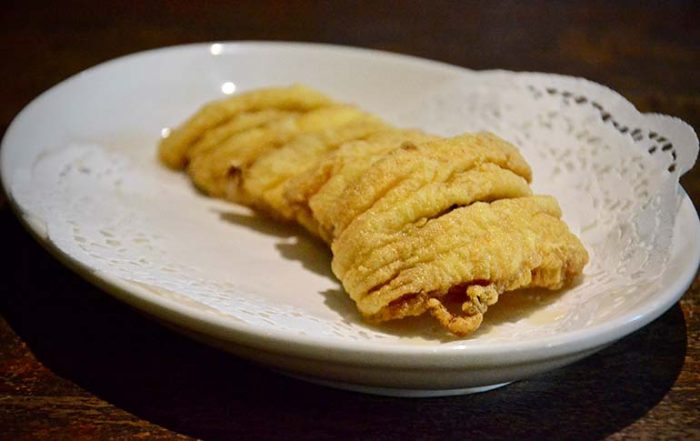 Bombil, also known as Bombay Duck, is an acquired taste but the Bombil Fry served at Ferry Wharf was not only different in presentation but taste too. The bombil was so thinly sliced and perfectly crisp on the outside that it grew on me in an instant.

Now that I had enjoyed the Bombil Fry so much, I decided to continue ordering dishes that are most loved by the regular patrons of Ferry Wharf. "Then you must try the Mangalorean Ghee Roast!" replied Prakash promptly. "We don't make it in the traditional way like a potato, chicken or mutton but in the form of a biryani." That was enough to pique my interest.

A Little of Everything

If the many options on the menu leave you confused, like they did me, simply go for a Fish Thali. It has a little bit of everything. 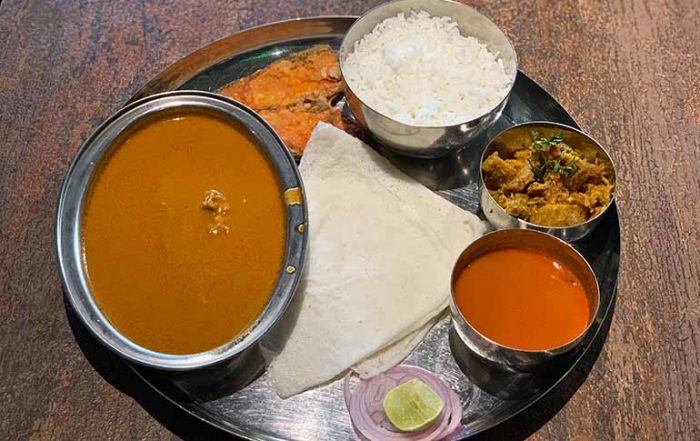 The Fish Thali came with my favourite Neer Dosas served with a Suran Bhaji, the Saar of the Day (that day it was Kokum Saar), a piece of fried fish and some fish curry.

Also Read: Check out the thali variety at Bombay Vintage

Everything you relish at Ferry Wharf was first tried and tested at home, informs Shayana Shetty who develops all the recipes served at the restaurant. "All these recipes were made in my kitchen and have now made their way to the restaurant. There's nothing on the menu that I don't already make at home," says Shayana, and adds, "Apart from the Ghee Roast, the other most popular dishes at Ferry Wharf are Kori Roti and Prawn Gassi."

Caramel Custard was on the dessert menu which I found a bit odd but was encouraged to try anyway. 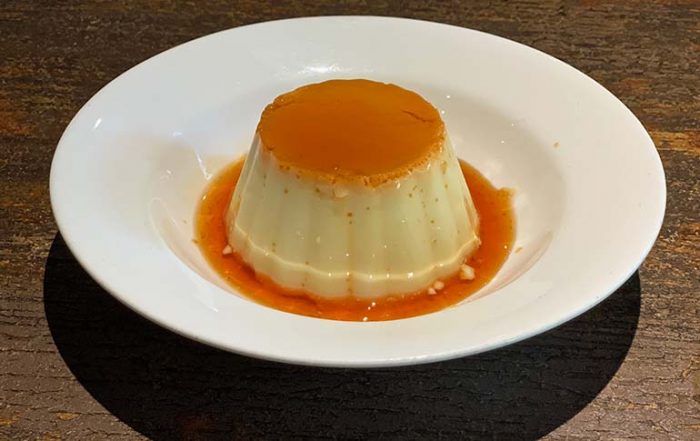 While the custard's consistency was perfect, it was a miss for me in terms of flavour.

The ambience at Ferry Wharf will instantly teleport you to a beach. The restaurant's blue colour tone and nautical theme decor deepen its connect to everything seafood, sand and sea!