Here are some of the greatest Indian sandwiches 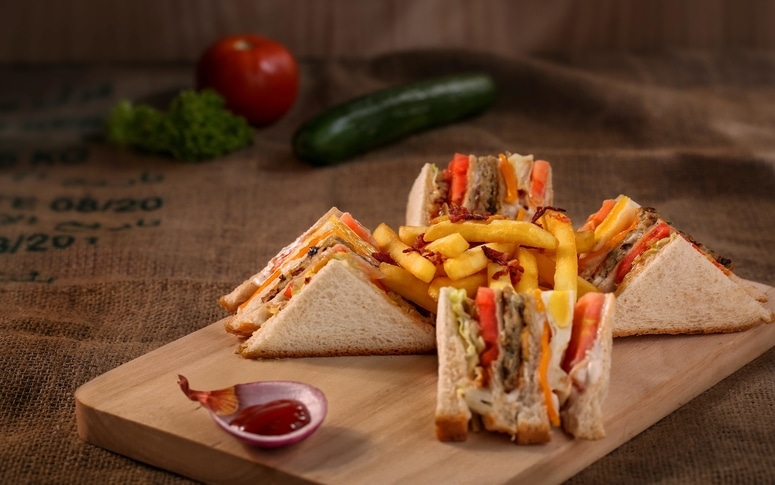 Celebrating the Indian sandwich, one slice at a time

When you think of Indian cuisine, you think of flavourful curries, lentils, and vegetables. Bread is a primarily western item that found its way into Indian cuisine through the Portuguese in Goa and Mumbai. The white loaf bread was popularised by the British and eventually Indian sandwiches began to emerge. Before they became popular, the Goan pav or white bread was eaten with curries and in dishes like Keema-pav and pav bhaji.

As the availability of bread increased over the years, Indians enthusiastically adopted the concept of sandwiches. The most common ingredients found are fresh coriander chutney, potato filling, paneer, and vegetables. Most of these sandwiches are very light and easy on the palette. Today, we have rounded up 5 of the most innovative and interesting sandwich recipes from the streets of India.

It is believed that the very famous Bombay Toast was invented by somebody in the 1960s. The '80s saw the peak of the sandwich craze. College students, office-goers, and people on shopping sprees, all stop at nondescript sandwich stalls for a delicious snack like the butter smeared, hot Bombay Toast. The beauty of this sandwich lies in its minimalism. With only a few vegetables, a secret spicy chutney, and a special sandwich masala, the Bombay Toast has the heart of every Mumbaikar.

When we tell you that the specialty of this sandwich is the generous amount of sev that goes on top of it, you shouldn't be surprised. We all know about the love affair Indore has with sev. This Indian sandwich is not only a street favorite but also a staple snack among the students in colleges. Each shop and restaurant has adopted its own recipe for the sandwich filling but the sev remains the hero ingredient. This sandwich is crunchy, packed with flavors, and also makes for the perfect midnight snack.

This is more a household recipe than a street favorite. It is the kind of Indian sandwich which is often seen on home blogs and is made using hung curd, greek yogurt/ fresh curd along with a few veggies like corn, capsicum, carrots, chilies, etc. It became extremely popular when Priya Krishna (former employee of Bon Appetite) developed a Dahi toast with a special tempering or chhaunkh.

This one is a total hit with the Indian Vegetarian population. As a result, there exist a dozen versions of the paneer sandwich. The most popular one being the paneer tikka sandwich. Paneer is marinated in curd and a few masalas for a couple of hours, grilled on a pan, and then filled in between two slices of bread. Some people even smoke the paneer with a charcoal technique. This is a slightly heavy sandwich so it could even pass for a full meal.

As the name suggests, this sandwich only has two main ingredients - the coriander chutney and cheese. The reason we put this on the list of the greats is that the tasty sandwich is made with freshly churned chutney made and lots of creamy cheese. It's extremely light on your wallet and still qualifies as one of the most appetizing snacks in Bombay.

Rava Toast is an open Indian sandwich and is mostly eaten for breakfast. The recipe is an Indian household favourite as it packs in a punch of nutrition and taste. The preparation is very different from others - the batter is prepared with semolina, yogurt, and vegetables, and is spread over the bread. It is then toasted in a hot pan which makes it very light and flavourful.

Pudla is a savoury pancake made from besan and a medley of veggies like onion, tomato, and green chilies. This pancake is usually stuffed between two slices of bread, toasted in a pan, and then eaten with green chutney and tomato ketchup. It is a quick fix for when you want a quick breakfast or dinner.