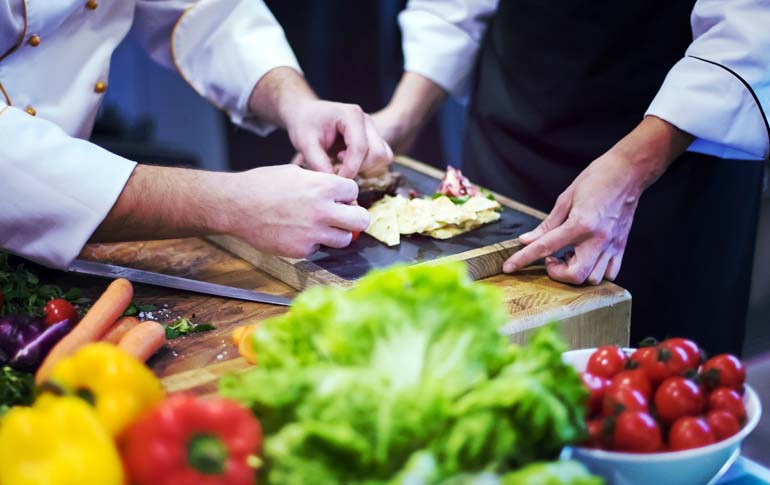 Between prepping for her upcoming trip to Spain, Chef Shagun Mehra tells India Food Network about the Four Hands Menu she is hosting with Chef Xavier Pellicer in his restaurant, Xavier Pellicer, in Barcelona on April 29, 2019. 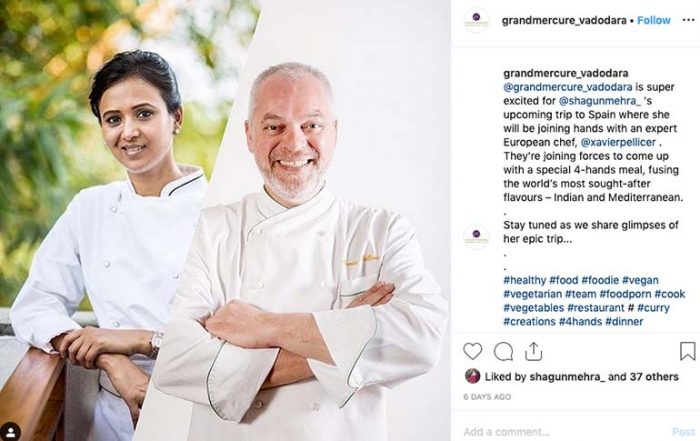 "The planning for the Four Hands Menu began a year-and-a-half ago," informs Chef Shagun, "We finally solidified our venture when he came to India last year. It worked out perfectly because I was scheduled to be in Spain later to attend a study programme."

Chef Shagun is one of "28 chefs and food & beverage professionals from around the world" to be selected for a study programme sponsored by Foods and Wines of Spain, a department of the Spanish government that works to promote the commercial side of food and wine in Spain.

Also Read: I want to unearth the past and celebrate it: Chef Shagun Mehra

Talking about the Four Hands Menu, the Goa-based chef says, "It's a very new concept that European chefs have started hosting at their restaurants. It's two chefs coming together."

The four hands menu promises to narrate the culinary stories of both the chef's cultures. "You can feel the language of both the chefs coming through in the menu," continues Chef Shagun, who was born to a Marwari family in Baroda and studied in Nainital.

"It's not like there are some dishes that are completely his or vice versa. All dishes on the menu have nuances of both our styles." The self-confessed "nomad" has lived in Switzerland, Paris, New York and Mumbai, before finding peace in the backwaters and paddy fields of Goa five years ago.

"We are tying Indian coastal flavours with Mediterranean produce. It's a fusion menu done differently, interestingly and thoughtfully," says the 41-year-old chef about the menu lined up for diners in Barcelona.

Listing some of the tasty treats, Chef Shagun says, "We have a tomato rasam but we are using Spanish tomato, tomàquet. Then there is pani puri but it's stuffed with baingan bharta and a beautiful yogurt on top." 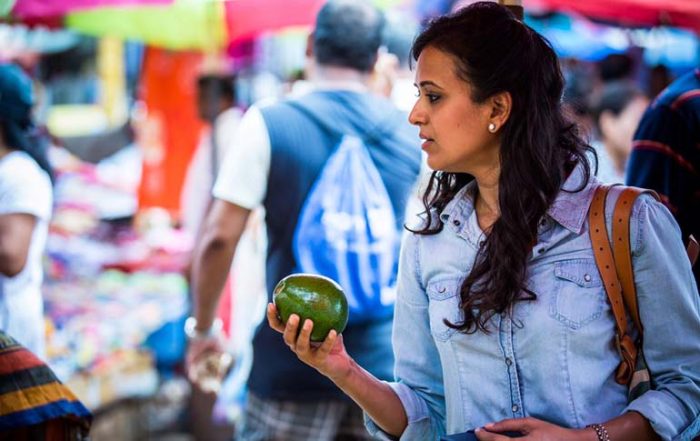 It's not just the Western Indian coast that reflects on the menu, "There's also fish paturi," informs the chef who is also Food & Wine Director, Coco Shambala, a luxury villa resort in Goa and Sindhudurg. "We're using corvina, the local fish, infused in poppy and mustard seeds, cooked in banana leaves like the Bengali recipe." The chef duo is also serving "baby uttapams" with "beautiful Spanish prawns".

"We're also serving sabudana vada. Chef Xavier died for it when he came to India, he was really amazed by it," says Chef Shagun, who also moonlights as a food and wine consultant apart from curating bespoke meals.

Chef Shagun, who has "eaten at a lot of good restaurants" around the world, says, "That's what I do. You can call it my source of education or joy but I like to spend my money not on expensive bags but good food and wine." It's one such fine dining adventure that led her to Chef Xavier's restaurant in Barcelona two years ago. 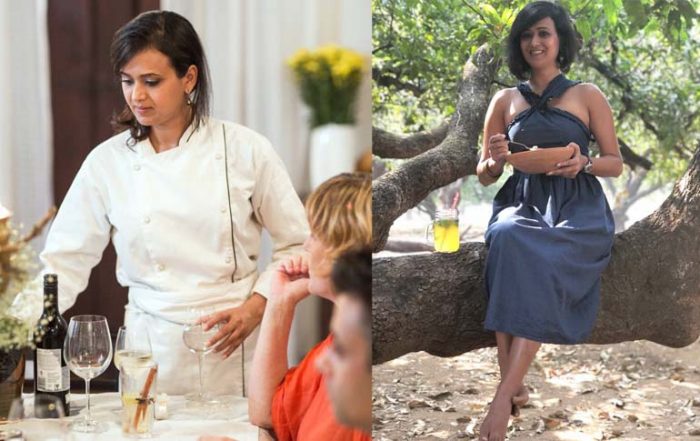 It All Started With a Papadum

"For the first time in my life, in Europe, the first thing served to me at a Michelin-starred chef's restaurant was a papad," recollects Chef Shagun. "It took me by surprise. I remember thinking, 'This is incredible!' and the menu was not Indian at all." 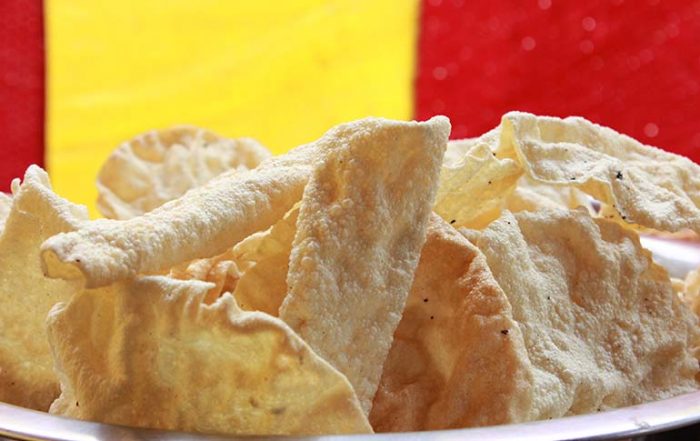 Luckily for her, the chef happened to be in the kitchen. "I introduced myself and what I do," recollects Chef Shagun, "He seemed really interested in Indian spices and Ayurvedic cooking which is very unlike most Spanish cooking and chefs because it is such a heavy meat and seafood eating country. But Chef Xavier was already very different that way. His restaurant has been ranked the best vegetables restaurant in the world. I think that's where we struck the chord."

"The next time I went to Barcelona," Chef Shagun continues, "I took some highly curated and interesting spices with me. I was introducing him to some of the non-regular Indian spices so he got really excited by that." Chef Xavier was "completely surprised to find out that not all Indian spices are spicy," Chef Shagun tells us. 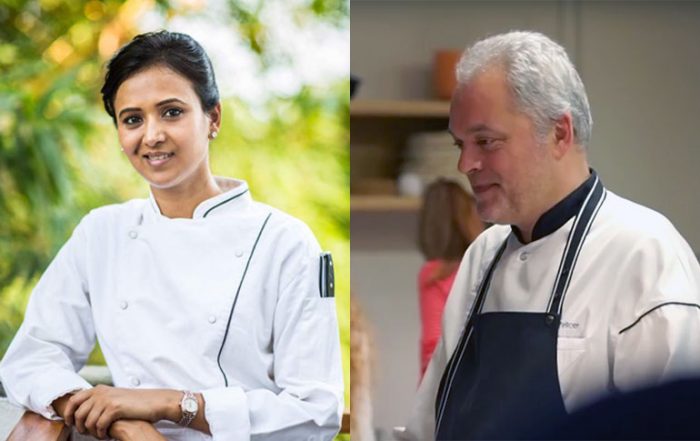 The Spanish chef was particularly inspired by kachri powder, a tangy spice mix used in Rajasthan, most commonly to prepare the state's famous Laal Maas. "He was really amazed. He said, 'This is great. I love that I can use the aroma of the spices without it actually being too hot.' He realised that even spices are not spicy when used in the right way."

A jar of chaitra roses gulkand was also on the list of curated items Chef Shagun introduced to Chef Xavier. "He opened that dabba and he was like, 'Oh my god! It's smelling roses everywhere. What is this incredible jam?' I told him, 'Well, it's rose petal paste and it's a very special rose that we harvest in the summer months in particular parts of India."

It's these culinary exchanges between the Indian and Spanish chefs that led to the Four Hands Menu, marinated in a blend of both cultures.