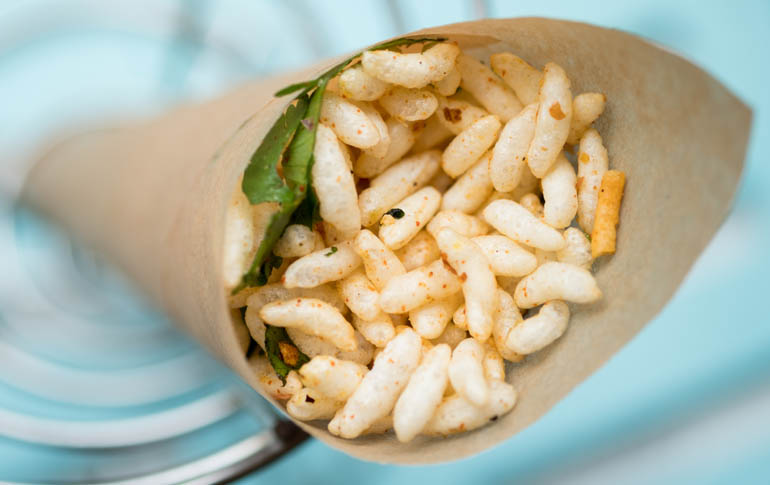 Guess what cricket fans at The Oval are munching on between the cricket world cup matches? India's very own bhel puri! And no, it's not a bhelwala from Mumbai's chowpatty who has set up his thela outside the famous cricket ground in London but an Englishman instead!

Veteran cricket journalist, Sunandan Lele shared a video on Twitter of Angus Denoon swiftly making Bhel Puri for hungry customers outside The Oval in London during India's match against Australia.

Between preparing the bhel puri mix in typical Indian-style newspaper cones, he informs his amazed Indian customers that he learned the art of making the Indian street food when he visited Kolkata. "I learnt from the masters," says the jolly Englishman who is pleased with the desi attention but doesn't lose his focus while mixing the ingredients in the paper cone.

In the video, Angus is seen equipped with all the typical ingredients that are used to make bhel like puffed rice, sev, chana and moong dal, chopped vegetables and "imli chutney" he says proudly. The British bhel puri even caught the attention of veteran actor Amitabh Bachchan who shared the video from his Twitter profile and said, "bhery bhel done".

Meanwhile, the video gave Twitter users yet another reason for a friendly food fight, a common occurrence on the social media platform. Since Angus mentioned he learned the art of making bhel puri from Kolkata, desi Twitter users were left debating whether Angus was making bhel puri or jhal muri. When one Twitter user confirmed that it was indeed jhal muri and Angus is in fact known as the colourful and vibrant.

Not Bhel Puri. It's Jhal Muri. Bengali variant of Bhel Puri. There was a documentary on this Bhel Puri wala on discovery.

Both Indian street food, made with almost the same ingredients, look similar however originate from opposite ends of the country. While bhel puri is an iconic food from Mumbai, jhal muri is Kolkata's pride.

In reply to Lele's tweet, Kumar Vishwas tweeted a video of a man selling "garam garam mungphali" on the streets of London.

That's not all, Indian street food seems to be a favourite at food stalls inside the stadium as well. KR Nayar, Chief Cricket Writer, Gulf News, who is logging a diary from the ICC Cricket World Cup 2019, reports that Indian food is selling like hotcakes among desi and non-desi cricket fans alike. He also spotted a food truck called Goody Gujarati.

In his log from May 30, he says, "Although many fans from the subcontinent, especially India and Pakistan, did not turn up for the match, all food stalls selling Indian food were seen to be doing brisk business."

Nayar spoke to a fan of samosas from South Africa who said, "I enjoy samosas and I love to munch them, just like how my team will chew England today." Mumbai's foodie Kunal Vijayakar was seen feasting on the crispy Indian street food Punjabi samosas at the Cricket World Cup as well.

Nayar also informs his readers that Team India prefers dining at the many Indian restaurants littered all over Southampton, the city neighbouring London which boasts a large Indian population.

It's here that Nayar bumped into Dinesh Karthik and Vijay Shankar feasting on crisp dosas. "Chennai Dosa is a popular eating joint in Southampton. The restaurant boasts of serving authentic South Indian cuisine, including a variety of dosas. While we waited for our food to arrive, suddenly there was a commotion around. Indian cricketers Dinesh Karthik and Vijay Shankar had walked in," reports Nayar.