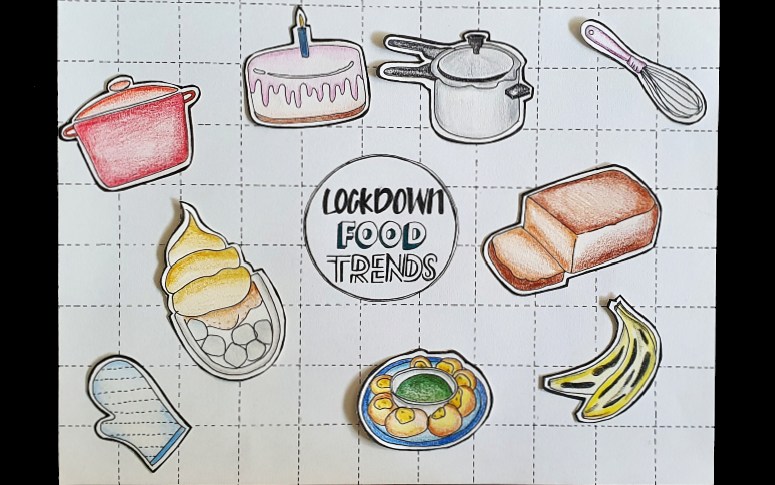 Like we say, necessity is the mother of all inventions, the lockdown brought about a change in our food consumption patterns like we've never imagined. We're all stuck at home, juggling between working from home, house chores and spending a lot of time in the kitchen! Having said that, the recipe searches in India shot up in the months of March, April & May! And, it's only increasing with time. That means most of us are cooking, baking, and spending a lot of our time, curating and learning from the internet. Yes, we are cooking up a storm with the emergence of the new food revolution that we've succumbed to.

"As people get adjusted to restricted living as the new normal and lack of options to eat out, consumers are increasingly taking on the chef role, a trend which will continue post lockdown too," Devendra Chawla, marketing director, Nature's Basket & Spencer said.

While so many trends emerged from the West, there were some Indian recipes like chicken, paneer, dal & Gol Gappe after cake that were the top most-searched recipes on Google! It was also concluded that more than reading recipes, people wanted to listen to or watch recipes. If you're a food creator, you'd know what we're talking about.

Whipping away to glory was the story of many kitchens in the country during the lockdown. Spreading joy, laughter and showing off some great cookery skills became a part of that deal. And, before you knew it, everyone one in the world who had access to an oven was baking! Actually, even people without ovens were either pressure cooker or pan baking, which ultimately caught on as a rising trend in India. Irrespective of the lockdown, baking goodies had become a therapeutic indulgence. Instagrammers are trying one thing after the other.

📈A thread on Search trends: From teddy bears in windows 🧸 to microwaved bread 🥖 — here's what the world is searching for this week. pic.twitter.com/FxvNc7H9Mo

Banana Bread- Where did the trend come from? Supposedly a housewife, somewhere in America, had some overripe bananas that were just about to go bad and decided to try and make bread out of it! And, obviously, the rest is history. Google saw a surge in search of banana bread recipes and suddenly everyone was making it. Of course, variations like banana cake, banana muffins and banoffee pies were also being made as an alternative but fast forward to today, Banana Bread made it to the top of the list!

While the West was going crazy about banana bread and toilet paper, here in India, Rava & Maida were flying off the shelves like hotcakes! From Rava Sheera to rava cakes, we donned our chef hats to make delicious treats out of this staple.

Also Watch: If You Love Bananas, This Basic Banana Bread Recipe Is A Must Try

This Tik Tok trends literally went viral within hours of it circulating and before you knew it, Instagrammers had taken to it like wildfire! This 3-ingredient coffee was just too delicious for us to skip too so we unapologetically indulged. It was so nice that we tried it more than twice! And of course, if you're on any social media platform, you'd have gone through a plethora of Dalgona Coffee recipes, making it one of the most-searched recipes during the lockdown.

Also Read: Here's How To Make Dalgona Coffee If You Still Haven't

According to Google's poll on Twitter, another word that was highly searched was "Quarantine Snacking".

📈A thread on Search trends: From teddy bears in windows 🧸 to microwaved bread 🥖 — here's what the world is searching for this week. pic.twitter.com/FxvNc7H9Mo

From hoarding the basic necessities like atta, maida, rava & sugar in the first two weeks of the lockdown, the pattern of buying and eating had changed after that.

In an interview with Bloomberg Quint, Future Group President Food & FMCG Kamaldeep Singh said, "The definition of basic necessity has changed in a couple of weeks from basic foods to snacking and munching items."

From biscuit no-bake and 3-ingredient cake recipes, biscuits are one of the highest-selling snacks in the supermarkets in India. Along with that, another emerging search word in the snacking category is Aloo Chaat! Yes, it's day 41 (but, who's counting, right?) of the lockdown & we're all missing our favourite street foods. Renowned chefs and food bloggers took to Instagram and shared their versions of some of the best chaat preparations at home.

According to Google insights, the recipe searches on Youtube increased by 20% with a recent rise in search of street food recipes! And, the top most-searched recipe in this category was the Pani Puri recipe that saw a rise of 107% search rate.

Comfort food means different things to different people. What mac 'n' cheese is to the West, khichdi or biryanis is to Indians. Rice is our fall-back ingredient and we've proved it time and again with our one-pot meal recipes search on google. Keywords like easy, quick & tasty can easily be associated with rice or khichdi recipes! From the time-consuming mutton biryani (Mutton being another Instagram trend that has caught on from the past couple of days) to chicken and vegetable pulao, rice recipes have been highly searched. According to Google insights, "With the closure of retail stores, the options for ingredients have been narrowing. People are looking for alternative ingredient options to savour their favourite dishes without missing out on taste. There has been a 200% growth in searches with the word, "without" in the Food & beverages category."

Channelling their inner Picassos, food bloggers got to kneading dough to make focaccia, but only with the exuberance of nature this time around. These pieces of bread look absolutely stunning and no wonder it has been going viral on social media! Popularly known as 'focaccia bread art', the trend is all about using colourful vegetables as an embellishment to make the bread look oh-so-pretty! Basically, this trend is possible for people who either have access to fresh vegetables or those who grow their own veggies!

Break out the measuring cups. We have a list of the most-searched bread recipes from the last month. https://t.co/kHekhuOCf2 🍞