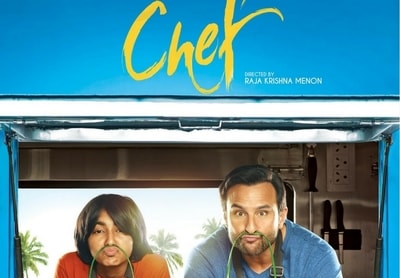 The much-awaited trailer of the movie Chef is out and the internet could not be more excited. The film, directed by Raja Krishna Menon, is the Hindi adaptation of the critically acclaimed Hollywood film Chef (2014). Saif Ali Khan plays the lead character Roshan Kalra and there is much speculation about whether the legendary Jiggs Kalra has inspired this name.

Saif Ali Khan shares a moment with Svar Kamble, who plays the role of his son. Source: Twitter

Roshan Kalra plays a Michelin Star chef based in London and the plot appears to revolve around his relationship with his family, which is based in Kochi. His relationship with his son is strained because of the distance between them. In an effort to repair their relationship, he converts an old double decker bus into a food truck and travelling restaurant to pursue his culinary endeavours in India. The father and son embark on a culinary journey filled with laughter and memories. While much of the plot remains unknown, these are the bits we learned from the recently released trailer.

Saif Ali Khan cooks up a storm in the movie. Source: Twitter

Films about food have graced the silver screen before, but Chef may be classified as the first hardcore food movie. Chef takes a culinary journey across India by featuring the flavours of idiyappam to chhole bhature, showcasing the diversity of Indian food. Like every Indian movie, Chef is also filled with emotions, drama, and spice – both in the ingredients and the plot! We’re looking forward to this filmy tadka, are you?