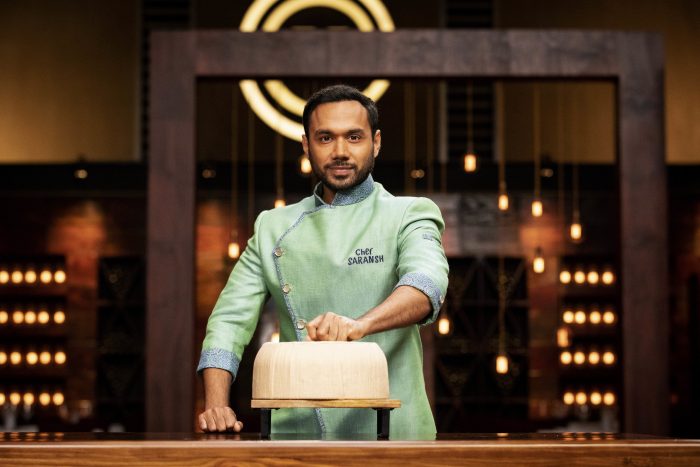 The Best Butter Chicken in the World

“The best dishes aren’t always served in posh restaurants. Some of our favourite foods come from holes in the walls, from street vendors, that come from great food cities around the world. They are usually places that specialise in doing one thing extraordinarily well. But that doesn’t mean that the cooking isn’t complex. Today’s pressure test comes from exactly one of these places.”

This is the introduction that brought a popular Indian dish on the sets of the world’s most successful cookery show – MasterChef Australia. And the man who got us there is young chef and maker of the immensely popular Goila Butter Chicken, Saransh Goila.

When we spoke a few hours ago Saransh was still giddy from seeing himself on one of the world’s favourite food reality shows. “Not even in my dreams did I imagine I would be in the MasterChef kitchen. This was never planned, it just happened, and I am amazed at the opportunity I was given.” Here are some of the highlights from our conversation.

How did you get your butter chicken from a Mumbai pop up to MasterChef Australia?

Chef and MasterChef Australia judge George Calombaris was in Mumbai for an event in October last year. My agent Kavneet Sahni knew him and arranged a tasting of Goila Butter Chicken in their hotel room. They went totally desi on it, using their hands and eating straight out of the boxes. George loved that the dish isn’t greasy, and being a chef understood the complexity of flavours. He was impressed enough to invite me to be part of the Melbourne Food and Wine Festival in March 2018. And that’s really how it all began.

While in Melbourne, I was invited to join the MasterChef Australia team as a guest chef for one of their episodes. The Goila Butter Chicken was going to be the dish for the pressure test episode.

How much did you have to change the butter chicken recipe to suit the show?

Their only condition was that I would make the chicken exactly as it tasted in the hotel room last year! Nothing modern, and nothing molecular. As is their process, I first needed to make the dish in their kitchens and write out a recipe for the contestants. Their spices were different, the tomatoes were much sweeter than in India, the honey in my recipe made the dish too sweet… it took me 3-4 trials before I got my dish right!

Tell us about the actual shoot.

The sets are spectacular. The team has been working together for 10 years and everyone shares a really friendly, easy vibe, including the three judges who in real life are exactly as we see them on TV. The entire show is unscripted. I was allowed to wander around the contestants as they cooked, chat with them and give them hints… but only through questions. One contestant’s chicken set on fire (because she left the skin on) and all I could say was, “That’s a lot of smoke, does the chicken look OK to you?”

I was almost as nervous as the three contestants in the pressure test. Even though I was invited as an expert, I recognise that it’s an immense platform to be able to showcase my cuisine and my country. I don’t take this responsibility lightly.

How many versions of Goila Butter Chicken did you finally taste?

Not surprisingly, all three dishes tasted different. It took me 6 months to perfect my own recipe so I didn’t think the contestants would be able to follow the instructions exactly on their first try. But I have to admit, I was shocked when I tasted the winning dish. It could have been a dish that I cooked myself.

What was the highlight of this experience for you?

When George Calombaris and Gary Mehigan made me lunch! It was a simple salad of fennel, arugula and smoked chicken but watching their easy rapport and tremendous kitchen skills was like a masterclass.

Your chef’s coat has been in the news too.

Matt Preston wants one too! I’ve really enjoyed designing my coats. I chose the colour as it was inspired by the peacock – India’s national bird.

What is next for Goila Butter Chicken?

I was on MasterChef Australia not because of who I am or that I have been a TV Chef. I was invited because of my dish. Today I am piggybacking on the success of my dish, and hope to break the stereotype that TV Chefs cannot cook. We are looking forward to growing Goila Butter Chicken to a few more outlets in Mumbai, and have even received offers from Pune, Bangalore and Melbourne. But we will expand only if we can remain true to the dish’s ethos. The day I need machines to make my food is the day to stop and take stock.

And for Saransh Goila?

If I ever wanted to be a restauranteur, then I would hope to be able to do what Manish Mehrotra did with Indian Accent. But that isn’t my aspiration. I want to spread the word about regional Indian food as far and wide as I possibly can. My journeys with #IndiaOnMyPlatter and #SadakChefs are what inspire me – we are more than oily curries and chicken tikka masala, and I have made it my life’s mission to showcase real Indian food.

OK SadakChef, give us your top three sadak tips for eating out in Melbourne.

This Week on IFN: Calling All Food...

This Week on IFN: About the Arts...

Pairing the right pasta for your sauce

Is this the new dining trend in India?

Loved Emily in Paris? Here’s where you can eat and drink just like her, in India