RIP Rishi Kapoor: Hope There's A Feast Waiting For You Up There 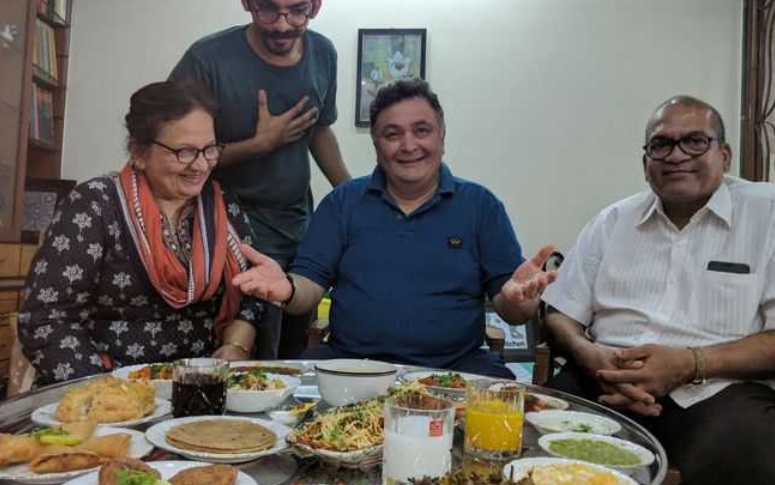 Veteran actor & silver screen's utter delight, Rishi Kapoor passed away at the age of 67, today i.e. 30th April. Battling with cancer for a couple of years now, he was rushed to a hospital in Mumbai on Wednesday morning. In a statement to the press, the Kapoor family said, "Our dear Rishi Kapoor passed away peacefully at 8:45 am IST in hospital today after a two-year battle with leukaemia. The doctors and medical staff at the hospital said he kept them entertained to the last. He remained jovial and determined to live to the fullest right through two years of treatment across two continents.

Family, friends, food and films remained his focus and everyone who met him during this time was amazed at how he did not let his illness get the better of him. He was grateful for the love of his fans that poured in from the world over. In his passing, they would all understand that he would like to be remembered with a smile and not with tears.

In this hour of personal loss, we also recognise the world is going through a very difficult and troubled time. There are numerous restrictions around movement and gathering in public. We would like to request all his fans and well-wishers and friends of the family to please respect the laws that are in force. He would not have it any other way."

We'll always remember him for mesmerising us with his performances from Mera Naam Joker as a child artist to Mulk & 102 Not Out with Amitabh Bachchan, his last ones! Of course, his recent performances in films like Do Dooni Char & Agneepath will be reminisced by film fanatics and go down in the history of enigmatic Bollywood performances.

But, we will remember him for being a foodie in the truest sense. And, it's no secret how the Kapoors were known for their Khatirdaari, their love for food & to feed people as well. It was a well-known fact in the industry that if one goes to the Kapoor family residence, they won't be leaving without eating some of the best food in the world! For most of you who've read about Rishi Kapoor, it was clear that his love for food was undying. Although trying to stick to diets, his weakness for good food truly was far more! Hot stuffed paranthas were one of his weaknesses on the sets of Housefull 2.

Although we've never got a chance to meet him or interview him personally, we would love to reminisce his passing with fond memories of him talking about food. His child-like enthusiasm in food conversations were an absolute indulgence.

In a conversation with Hindustan Times a few years ago, Rishi Kapoor said, "Yes, we connect food to non-vegetarian food. I love eggs too, I like them akoori style, which was also my dad's (Raj Kapoor's) favourite. I also like vegetarian dishes like Palak Paneer, Baingan Bharta and Yellow Tadka Dal." Family gatherings and Sunday brunches are a famous affair in the Kapoor Khandan. "I love the Yakhni Pulao my mother prepares, Khatti Dal and Fish Fry. I love eating at mom's house."

But could you guess, despite loving all the non-vegetarian affair & paranthas in the world, his favourite cuisine was Chinese! He enjoyed Japanese food as well.

Saina Nehwal writes, "Woke up to this sad news....May his soul rest in peace"

Anupama Chopra, critic & founder & editor of Film Companion talks about how his films, Prem Rog & Chandni were special to her!

Kiara Advani, a Bollywood actress writes, "We meet some people only a few times but they leave a lasting impression on you. Always in our hearts. Praying for his family and loved ones. RIP Sir"

Javed Akhtar, scriptwriter bid adieu to his friend, "Today I have lost a dear friend Rishi Kapoor. We had first met in Banglore in 1973. He had come for a charity show of Bobby n I was there for Sholay's shooting"

Anupam Kher, actor shares how Rishi Kapoor personality was a reflection of his enthusiastic, fearless & curious like a child nature.

Angad Bedi, actor remembers Rishi Kapoor for having lived life to the fullest!

And of course, there's no adieu without a large peg of something strong to go with all the delicious food he loved. So, cheers to you from down here... may your foodie soul rest in peace!