The Ultimate Guide To Eating On The Streets Of Mumbai 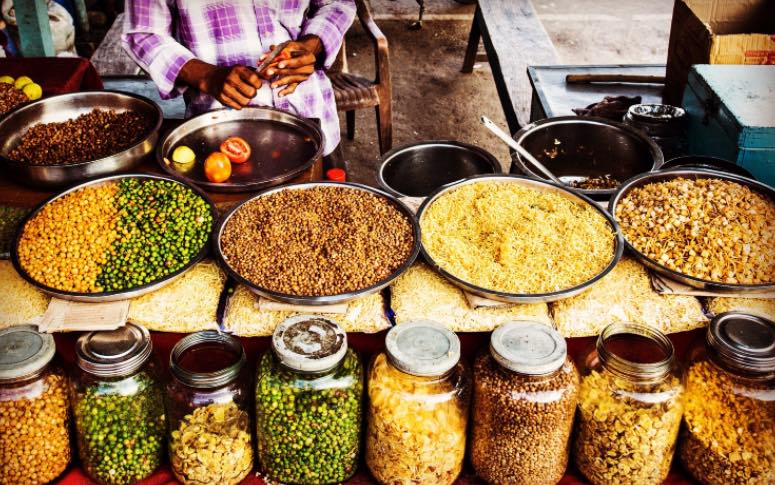 It is rightly said, "If you are hungry, there is no better city to find a snack than Mumbai."

The variety of street food that the city has to offer is large and even a larger number of people relish it on a daily basis. From pre dawn breakfasts to super late night hunger pangs to healthy snacks after your run, eating on the streets of Mumbai will never disappoint you. One of the most popular street foods of Mumbai is the very humble Vada Pav, quintessentially monsoon and Mumbai's and favourite, but there is so much more that the city offers.

1. Breakfast for the Champions

This is a city that never sleeps and it starts off its breakfast scenes as early as 5 AM! Somewhere near the stations you'll spot a street vendor selling you a delectable plate of food that you can kickstart your day with. This city offers a feast when it comes to breakfast. From the Parsi favourite of brun maska and chai to poha, upma and sheera, misal pav and idlis that get served on bicycles, there is a lot that you can devour if you're an early riser and a breakfast person.

We're sure you've eaten a lot of sandwiches, but there is something about the "Bombay Toastie" that is not only delicious but it is also synonymous with 4PM snack time in Mumbai.

The sandwich is prepared with two slices of white bread (Wibs in particular) slathered with butter and chutney, lined with slices of cucumber, boiled potatoes, onions and a single slice of beetroot. It is then toasted in a unique single toaster, that is manually turned over on a gas flame to get the perfect toastiness on the sandwich. If that's not enough, it is then topped with chutney, pumpkin-tomato sauce and sev, and goes on to become one of Mumbai's favourites!

While the "Bombay Toastie" is well known and widely loved, there is also something called the "Baahubali Sandwich", a new feature on the street foods of Mumbai, that was born out of a small stall in Borivali West. It is a large four-layered sandwich, spread with generous amounts of butter and chutney, stuffed with baby corn, onions, capsicums, mayonnaise and cheese in the bottom layer. The middle layer is loaded with canned pineapple, pickled black olives, pickled jalapeno and more cheese. And the third layer is lathered in schezwan sauce,topped with tomato slices, grated beetroot, grated raw mango, grated carrots, grated cabbage and even more cheese than the previous layer. The fourth and the last layer brings out the sweet & crunchy notes with jam, grated cheese and potato wafers. Sounds like an explosion of hundreds flavours in a mouthful? Wait till you try it. It sure is not for the faint-hearted.

Talking about street foods Mumbai, the city also boasts of the infamous Mohammad Ali Road that in the literal sense is heaven of non vegetarians. The number of food crawls that happen here during the holy month of Ramadan and just the sheer number of people visiting this on a daily basis shows how popular it is.

From the melt in mouth Malpuas with Rabri at Tawakkal Sweets to Noor Mohammadi's Nalli Nihari and Chicken Sanjubaba that are most sought after to the Seekh Kebabs at Chinese n Grill, these dishes are sure to take you to the heavenly meaty abode. Last but not the least, you get to wash down all the spicy goodness with a large glass of Masala Milk from Noorani Milk Centre too, ending your delightful Mohammed Ali trail.

While Mohammad Ali Road is a must-visit when in the city, Mumbai is also home to the Mahim Khau Galli which is yet another heaven for non vegetarians! From the lip-smacking Suttarfeni at Suleman Usman Mithaiwala to the Baida Roti to the "Tender, Chunky Meaty Goodness of Bhuna Meat," as animator Abhijeet Kini describes it, Mahim Khau Galli fails to disappoint you. Here, the shwarama's are available at almost all the stalls and the very famous falooda from Baba Falooda is a pure indulgence.

As much as Vada Pav is loved by Mumbai, we're also biased towards this crunchy on the outside and spicy potato-ey goodness on the inside, Samosa and it is unfair to not mention it when it comes to street foods of Mumbai. The Samosa is a triangle shaped deep-fried snack stuffed with potatoes and green peas and spices, served as is or put inside a pav stuffed with assorted chutneys. The Samosa Pav is another staple and go-to snack for anyone who is in a rush!

While the Samosa Pav is found across the city, Sion, a central suburb in the city, it is home to Gurukripa, a joint known for its Chole Samosa. It is place is visited by hundreds of people in a single day and is loved to an extent that people travel from very far away to relish these samosas.

Mumbai's answer to flavours packed in a roll is something called a frankie. It is primarily a maida or wheat chapati stuffed with an assortment of sauces, lots of onions and a spiced potato mash cutlets/chunky chicken and eaten on the go.

A little spicy and yet, droolworthy, this is one of the street foods of Mumbai that is extremely popular amongst the youth.

While that is the standard one, there also is a large variety of filling options available. From mayonnaise to Chinese to paneer and other non vegetarian options, it is safe to say that there is a frankie for everyone.

Dotted along the streets leading to most stations on the western line, one can find a lot of vendors with these huge tavas and large piles of racks of eggs! From an omelette to boiled eggs to sunny side up to anda bhurji, you think it and they have it. Also, night owls favourite, the stall under the Santacruz walkway is open until the wee hours for anything and everything eggs. Cooked in loads of oil/butter, these places are truly loved by egg lovers!

Also Read: Where to get the best street food in Goa.

Another new favourite amongst the people of mumbai is the desi chinese food that is devoured on the streets of Mumbai. Unlike what you get in various other places, you have dishes like Manchurian Chaat which are manchurian balls tossed in Schezwan sauce and some spices, served dry. Then there is the Chinese bhel which is typically deep fried noodles tossed in loads of Schezwan sauce and vinegar and chopped carrots and cabbage and spring onions, making for a delicious crunchy evening snack.

While these are the usual, there is Mehul's Shreeji's Fusion Kitchen in Borivali West that serves something called the Sev Puri Extravaganza which is also called the Pizza Sev Puri; it is flat puris topped with onions, capsicum, paneer, corn, jalapenos, pizza sauce and cheese which is then blow torched and topped with thousand island dressing and oregano and herbs and then served. For the fusion food lovers, this one is a must have!

The simple rice batter dosa from the southern part of the country has traveled up to the city and since its arrival it has gone through some massive transformations upon its arrival in the city. From the Cheese Pav Bhaji Dosa to the Palak Paneer Dosa, Maggi and Manchurian Dosa to a Chilli Paneer Dosa and even a Pasta Dosa; you name it and you've got a Dosa available in that flavour.

While we drool over the thought of these delicacies, let us know what is your favourite Mumbai Street food in the comments below!