Book Review: Pangat -To Read Or Not To Read? 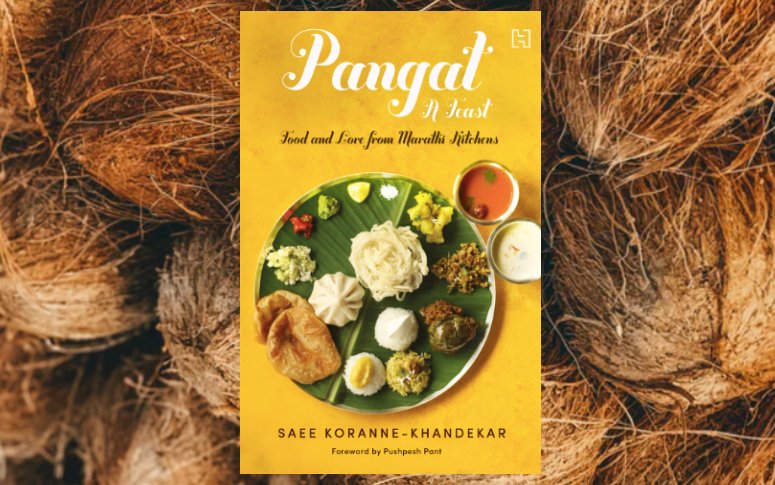 First things first, I’d like to tell you that if you’re not a Maharashtrian, you must read this book & if you are one, you must DEFINITELY read this book! Let me tell you why & how Pangat: A Feast, a book by Saee Koranne happened to me. For all the readers who don't know what Pangat means, it literally translates to having a light-hearted feast, starting from appetisers to main course, all served one after the other.

What did I know about Maharashtrian cuisine?

I wasn't privy to anything apart from vada pav, poha & misal pav when I first came to Mumbai (just like most non-Maharashtrians); I really had no clue what the cuisine was all about. With time, my knowledge maxed out at Thalipeeth & Thecha & I'm embarrassed about not knowing it sooner. But, Pangat intrigued me as one of my colleague was reading it. And, most kindly enough she offered it to me even before finishing it! Once I started reading, the first few pages were a revelation & from there on it was a different story altogether. My curiosity for words (that I was literally hearing for the first time) like Bhareet, Phodni, Vili etc, for the same techniques & ingredients used in a Gujarati household (that's where I come from) in Marathi language was novel. I wanted to read more, know more. Also Read: 4 Regional Food Books To Add To Your Bookshelf

What I thought about the book?

Pangat is a well-written book for beginners that not only sings praises of the Maharashtrian cuisine in deeper connotations of history & culture but it is a book that helps one explore the regional cuisine of Maharashtra- step by step. If you're a Maharashtrian, you'll find recipes amiss. Having said that, this book also comes with a disclaimer for all those who think they’re going to learn everything Maharashtrian from this read. But in her defense or not, she states in her book, “ I know that there are so many culinary vignettes that I have not captured & so many recipes I have not shared. There are at least 500 more recipes that I would have liked to talk about & I can already see reader emails telling me I’ve missed something, which of course, I have.”

This 330-page book is a treasure and each section is like the pandora box of cultural, geographical & traditional anecdotes from Saee's life; how she learnt the recipe or who taught it to her. From talking about the four regions in Maharashtra to several communities living in each region, this book sheds helpful insights to understand the diaspora of food leeways & sometimes barriers that culturally defines old traditions in Maharashtra. In Coconuts we trust!

Another of my misconception that I was able to put to rest with this book was about the usage of coconuts. I think that coconuts belong to the Maharashtrians as much as it does to the Malayalis! Surprised by the liberal use of fresh coconut in the Maharashtrian cuisine, from bhaajis, chutneys, snacks to desserts, I learnt that it's a usual phenomenon in the Marathi household (as opposed to the stereotype that Marathi cuisine is all about the spice!). It definitely has a lot to do with the coastal geographical location of the state too. Of course, the regions closer to the coastal areas have shown to use the ingredient in abundance & you'll find that through the book as you read it.

It's not just about recipes but much more...

You'd normally think of a recipe book with just recipes, ingredient details with absolutely no inferences & influences about the dish, but this book is an exception! Although, only one little drawback of the book is that it isn't a visual one with drool-worthy food shots. That was one thing that really bothered me because I do like to step up my traditional cuisine game with a visual reference as a motivator. Watch out for this space as I'll also be making one of the dishes from the book. Till then, keep reading & cooking.