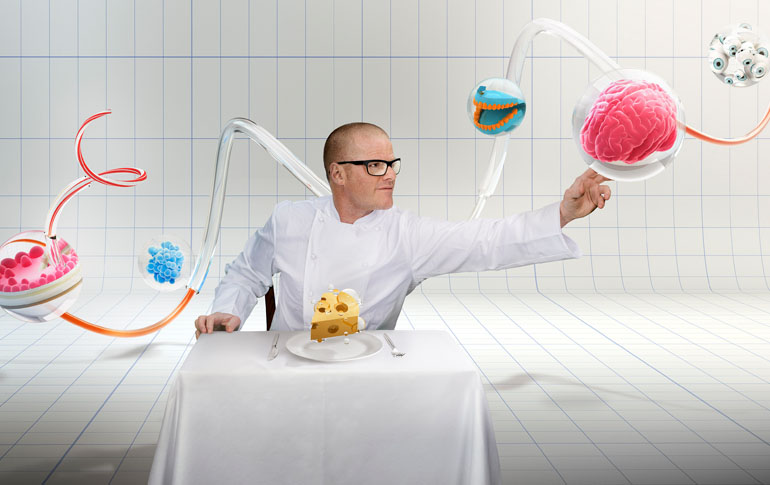 It was just another weekday and I was on a bus on my way home from work when my phone lit up with a notification. Thinking it’s just spam, I was about to ignore it when the words “Chef Heston Blumenthal, first trip to India, Mumbai and Delhi” caught my eye. The next thing I know, I had jumped out of my seat.

Noticing the glances of my co-passengers, I managed to contain my excitement and went back to reading the message again, just in case I’d misread!

Marriott International had invited the great alchemist, magician and master of molecular gastronomy to India on a two-city tour for the third instalment of their culinary initiative Masters of Marriott.

My culinary idol, THE Chef Heston Blumenthal was coming to India for the first time AND was going to be right in MY city - Mumbai! God bless them. Like any fangirl, I was determined to meet him, no matter what.

As if the universe had heard my wish, I soon received an invitation to attend an exclusive media interaction with the master of scientific cooking!

I converted to Team Heston right after his very first appearance in the second season of MasterChef Australia in 2010. I started following, almost stalking, all his work and I was hooked!

Right from his cooking techniques to flavour pairings and above all the way he challenged himself in the kitchen, the 19-year-old me was inspired by it all. Just watching or reading about Chef Heston’s unbelievable flavour combinations like egg and bacon ice cream or snail porridge, I couldn’t wait to try them myself!

The D-Day, April 18, 2019, had arrived. Romano’s, the Italian restaurant at JW Marriott Mumbai Sahar, was packed with the Indian food media and food bloggers waiting in shared anticipation to meet their culinary idol.

I had butterflies in my stomach. I didn’t know how I would react when I finally saw him in person. Everything was fuzzy but I remembered to grab a front row seat, right in the centre. I couldn’t afford to miss anything he had to say!

I was just about containing my anxiety when in the blink of an eye, Chef Heston Blumenthal was in the room. I couldn’t help but notice how the global culinary icon, with several Michelin stars in his kitty, had no airs about himself. 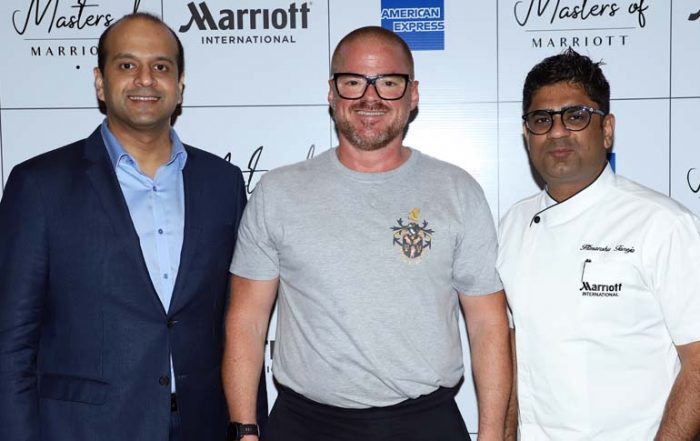 Chef Heston opened his address to the Indian food media by recollecting an encounter he had with Delhi’s infamous heat while shooting a show. “I wanted to make chicken tikka masala,” says the chef, “so I went to a spice market in North Delhi. It was such a hot day that the dried chillies were literally cooking in the heat,” he exclaimed, adding, “I think it was 47 degrees Celsius.”

While the room had burst into soft chuckles, Chef Heston continued, “I was trying to look into the camera and talk about the red dried chillies but I just couldn’t because I kept coughing thanks to the overheated dried chillies!” He recounted between laughter, “It was really difficult but it was an amazing experience too!”

His words teleported me to that Delhi market and I could almost feel the heat. I couldn’t help but salute the guy for being such a great storyteller! Think drama and theatrics with the famous Heston touch, that’s what rest of the media interaction with Chef Heston was like. 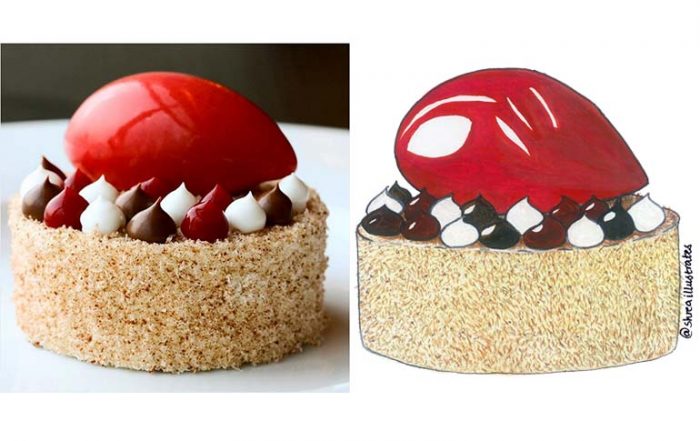 While the chef’s multi-sensory culinary expertise is known to chefs and fans around the world, the secret, he reveals, lies in the details. With gleaming eyes, he says, “I question everything with a why. I have a great curiosity to know about things and when something inspires me, I become a big kid!”

Talking about 15 years ago when he first started the concept of food pairing, the chef says, “I subconsciously started noticing things that are ever increasingly small. Perhaps standing over a workbench for over 20 hours a day for 10 years did that to me. When you do the same thing day in and day out, you start noticing and analysing smaller nuances.”

He explains, “When I put food in my mouth, things happen that I can’t see but I remember them afterwards.” His curiosity led him to research further “and I ended up working with bigger consultants and specialists. I spent time with perfumers, flavourists and food scientists.” All that research and questioning led to the realisation that “there were certain really small molecules that give food its flavour,” says the chef.

“That just made me wonder even more. Now when I look at something, I don’t look at it the same way I used to before.” His address to the media was peppered with a hint of spirituality and a dash of philosophy. “Like Aristotle said, ‘The more I know, the more I realise I don’t know.’ That’s what makes life exciting,” says the chef. 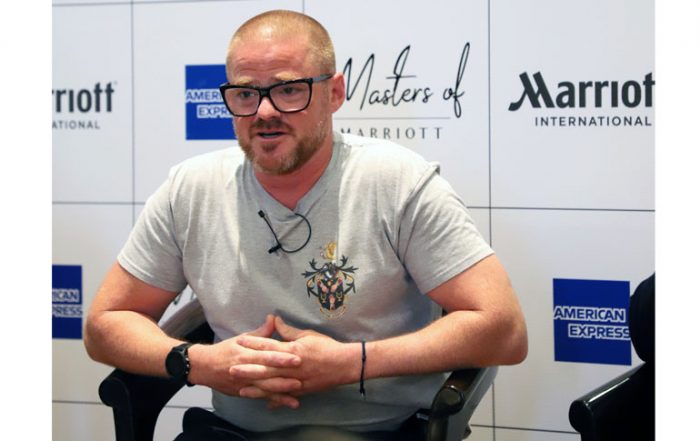 For his next go-to life mantra, the chef refers to Outliers by Malcolm Gladwell, and says, “The author writes that to be good at something, you have to spend 10,000 hours doing it. It’s the hours of purposeful practice that count.”

Illustrating from his life, the British celebrity chef says, “I spent a decade in a cooktop room, clocking in 120 hours a week and may have done close to 1,00,000 hours,” and adds modestly, “I would tell myself, if I can’t be good at something after 1,00,000 hours then maybe I should think about getting another job.” Chef Heston's inside to outside world view, and how he sees food from a similar paradigm, is what inspires me the most.

As if it wasn’t surreal enough that I was in the same room as Chef Heston Blumenthal, the global culinary sensation surprised his audience by opening the floor to questions. While I still couldn’t believe I now had the chance to talk to him, I raised my hand in an instant. 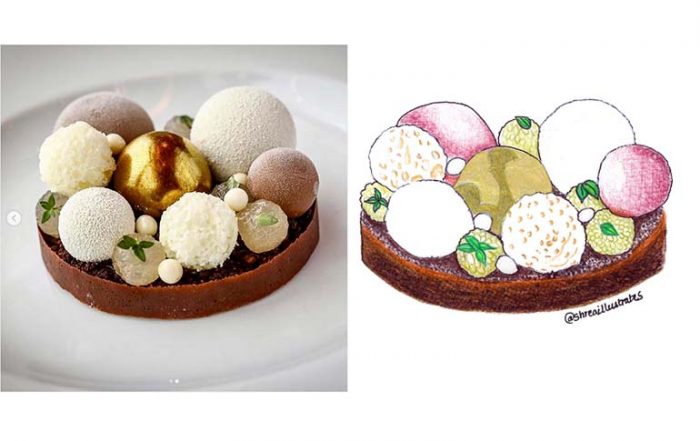 With utmost humility, the 52-year-old self-taught chef replies, “It becomes very self-fulfilling to know that you’ve been an inspiration to someone. It was quite hard for me to come to terms with that. But now that I’ve accepted that I’ve inspired somebody, I take the opportunity to have that interaction. So to them, I say, never lose the child within you. We should be learning from our kids. Little kids are in the best position to think. Creativity comes from that wonderful ability of children who haven’t yet learned the defence mechanisms that society instils in us.”

Everyone who is a Heston fan is ultimately a MasterChef Australia fan or vice-a-versa, including me. One of the audience questions to Chef Heston was about his famous Counting Sheep aka Floating Pillow dessert. The dessert, which has 84 ingredients and 19 elements and has been dubbed ‘insane’ by the media, was recreated by MasterChef Australia participants in the tenth season of the Australian cooking reality show in 2018.

“I pitied the contestants,” declares the chef humorously. “They had only four hours to make something that took me almost three years to develop,” adds the owner of four restaurants and pubs in England, of which three are Michelin-starred.

It was raining surreal moments that day when I got the opportunity to share the same frame with him. His first visit to India, me in the first row and now a magical picture! It’s been over a week but I still have to pinch myself. 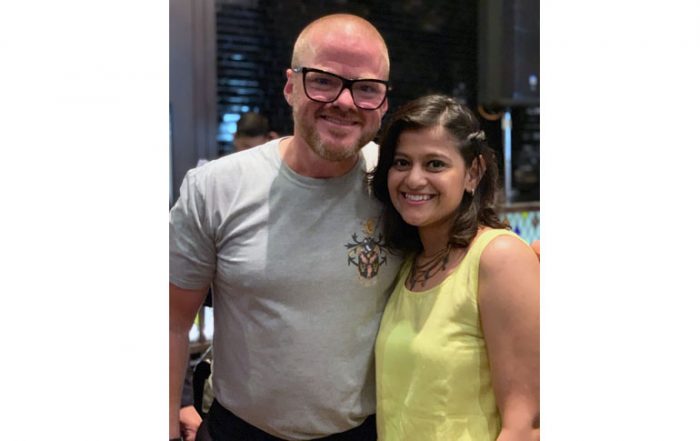 While there were many fans lined up to take a selfie with the chef, not for a moment did he forget to smile! I was lucky enough to get the last click with him, right before he was called in for that evening’s dinner prep.

Many of my wishes were fulfilled that afternoon but it only gave birth to new ones (well, it’s only human to want more) - that of dining at ALL of Chef Heston Blumenthal’s restaurants. It’s a dream in the works so stay tuned for my accounts of their manifestation!