Up Your Chilli Garlic Game With This Pickle! 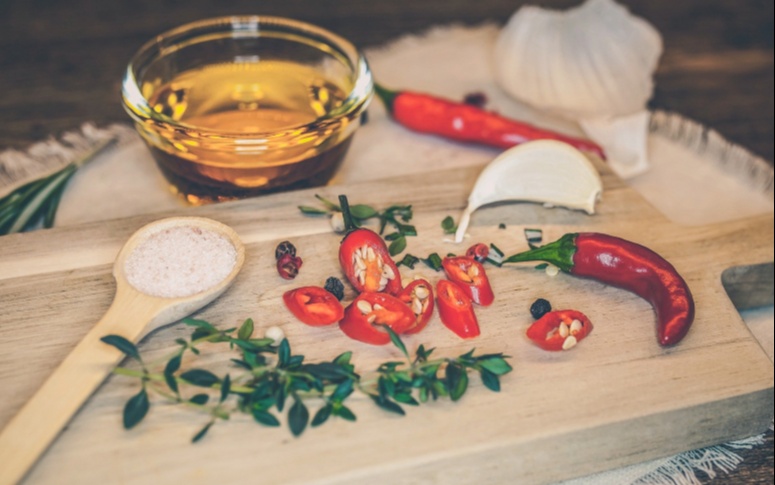 What's a meal without a pickle in India? Not very often we can imagine eating without accompaniments or condiments that tune perfectly with our food. One such pickle is the Chilli & Garlic pickle from Sikkim! It is like a party in your mouth; but did you know that it is indeed the most underrated accompaniment ever?

Speaking to Esha, who is originally from Sikkim but now stays in Mumbai was an utter revelation in more ways than one. This bonding overSikkimese food habits & Chilli garlic pickle went on to a conversation where she instantaneously quips, " It is a seasoning that can be paired with everything possible! The most common one being the momos. It is a seasoning that you can add to a bowl of thenthuk, thukpa or maybe even stir-fried noodles."

Her childhood memories took her back to just picking one spoonful of this chilli garlic sauce and how it would make any dish come alive, basically stand out. She passionately shares her thoughts, "It takes the taste to the next level altogether, it elevates the whole dish & transforms it into complete goodness of abundance, of more."

What is Chilli Garlic pickle/sauce/oil? It’s the pickling of dried chillies. It's called chilli garlic oil because it’s very oily. And this oil is like liquid gold because the aroma of the garlic and chilli is left in the oil & it can be used on anything. By anything, it really means anything like curries, soups, pizzas & pastas. There are also a lot of whole spices that go into this simple pickling process- bay leaf, star anise, cloves, Sichuan pepper. This pepper is very citrusy & gives a tarty lemony flavour; a pepper that is not hot but gives a tingly sensation on the tongue. It’s very much like having something with a generous squeeze of a lemon.

Sichuan pepper is very commonly used in the Tibetan cuisine and the pink peppercorns are a highlight in artisanal chocolate making. A chutney called Timbur, which uses freshly ground Sichuan pepper, directly from the pods is devoured with much contentment. In Nepalese, its called Timbur, Timur or tumir. "If tamatar ka chutney is your household staple, add a bit of Sichuan peppercorn for an Oriental & restaurant wala touch", she brims.

Sikkimese food thrives on seasoning. A small amount can turn the dish around & we're not just talking about the Chilli Garlic pickle here. "Being from the hilly area, Sikkimese food is full of seasonings because the food we eat is bland. We eat more steamed, boiled, oil-free, stir-fried food for which we need indulgences that liven up the food. Also because of the higher altitude, we need chillies to keep us warm", she adds. Making a chilli pickle or Sepen or a Churusibe; these chutneys and pickles are a Sikkimese household phenomenon. Go to any house in Sikkim & you’ll find it. Basically it's more like adding a little bit of zing to your everyday life with this pickle.

Secrets to the trade

Family cooking is so common in various cultures & regions across India that it's no different in Sikkim too. It's the nostalgic memories that most of us reminisce our childhoods by; circling around our grannies during the pickle season, pulling up a stool to have a closer look at what our mothers were cooking, frolicking over dried vegetables & fruits! Similarly, Esha grew up around her mother and grandmother where she recalls, "With Sikkimese families, it so happens that children are very much around the kitchen since a very early age. It was more like a picnic for us. It’s not like a task. Because we’re making very interesting stuff, from making noodles from scratch to dough for momos. We made momos as a breakfast staple and it’s there for almost for every meal at our dining table. Like one person can’t put together a momo all by themselves like in an hour, so it’s usually all about family cooking. Like somebody is making the dough, somebody is rolling it out, somebody is filling it & somebody pinching it up!" Pickles are traditionally loved all across the country; from sticky beans pickle, also called, kinema ka aachar to fermented soybeans & brining raw vegetables like radishes, beetroot, carrots, a method more prevalent in the Oriental Kitchens, of boiling water & adding vinegar and sugar." We make everything at home, from cheese to drinks, everything. We make dried meat at home, and we make pickles out of it," she giggles.

Store-bought pickles aren't really a thing in Sikkimese culture and Esha loves to pickle her chilli garlic whenever the jar in her refrigerator is exhausted. Although she adds a bit to almost everything she eats, she does have her favourite pairing too. "I really enjoy chilli garlic pickle with a thukpa! But if I had to Indianise it, it would be Idli! You could simply sauté the idli in the chilli garlic oil & voila, you have a lip-smacking dish."

Heard of eating in moderation? Pickles are the best examples of that. With so many stereotypical notions about pickles, "There are healthy pickles too! It’s very wrong to say that oil, butter and ghee are bad for health. Pickles use oil only for preservation. It’s not like pickles are bereft of vitamins. Pickling is an ancient process; basically, it’s all about storing for the whole year, for better days, to make dishes a notch better," she argues. To justify her argument she reminisces how she never thought about pickle in the way people think of it now- unhealthy! "I would take one bite of momo and need one dollop of Chutney to go with it. That chutney was very important for me, more than the momo itself," she laughs as she goes on to tell her pickle story on camera!

How To Make Chilli Garlic Pickle?

1. Take a pan and switch on the flame and when it's hot add rice bran oil to it.

2. Add chopped garlic and stir and cook for 8-10 minutes.

4. Pour in the garlic oil in the mixing bowl by keeping a strainer on.

6. Pour it in the mixing bowl that contains the garlic oil and the masalas.

7. Stir it with extreme care and then store in glass jars.