Turn Your Game of Thrones Party into a Game of Feasts 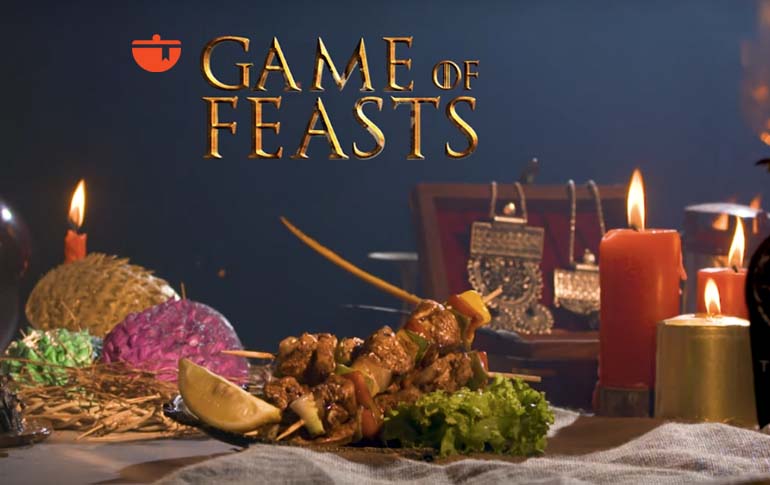 All of us know how popular Game of Thrones is so no points for guessing that India Food Network joined in on the GoT-mania to make our very own Game of Thrones-special recipes- Game of Feasts! We know how much you're going to miss your favourite show once it's over but you can continue savouring the flavours with these Game of Thrones recipes.

This Sinful Golden Roast Chicken Recipe translates Jaime Lannister's "coming from royalty" characteristic in the food context. It has a beautiful golden exterior and the succulent roast is sinful just like Jaime's incestuous relationship!

This Game of Thrones special recipe celebrates the deep connection Arya Stark shares with her Direwolf, Nymeria. Their connection is so strong that, if you've read the books you will know, they can even communicate through dreams!

Villainous, hateful and cold-blooded are some of the characteristics that define Cersei, which come through in this Game of Thrones recipe. Her feisty and never-dying hunger for more is similar to a meat-lover's passion for lamb racks!

Tyrion's love for wine is well known. In fact he reminds us of everything wine which is why the Game of Thrones recipe for his character had to include wine! His calm appearance but complex mind inspired us to create something that is simple on the outside but surprisingly smoky on the inside.

Nothing speaks Daenerys more than fire! An easy split-fire barbecue with a dash of sweetness from the traditional mead by Moonshine Meadery truly depicts both sides of this Mother of Dragons' personality - strong yet straightforward.

A man of honour with noble intentions is what sets Jon Snow apart in the Game of Thrones series. A humble dish like a Shepherd's pie only goes on to signify his personality through this meaty yet comforting, but full of flavour pie!

We also announced a #ContestAlert (which is now over)

With all the ongoing Game Of Thrones mania, We also had a Game of Thrones contest on May 15. And like most fans, including us, are crushing deep within as the date for the last GoT-episode-ever nears IFN made it a little better with a contest and exciting gift hampers from Moonshine Meadery.

Three lucky winners to get the most answers right, had to follow just three awesome IFN terms and conditions:

1. You are of minimum drinking age in your state