MasterChef Australia's Sandeep Pandit is in a Curry Controversy 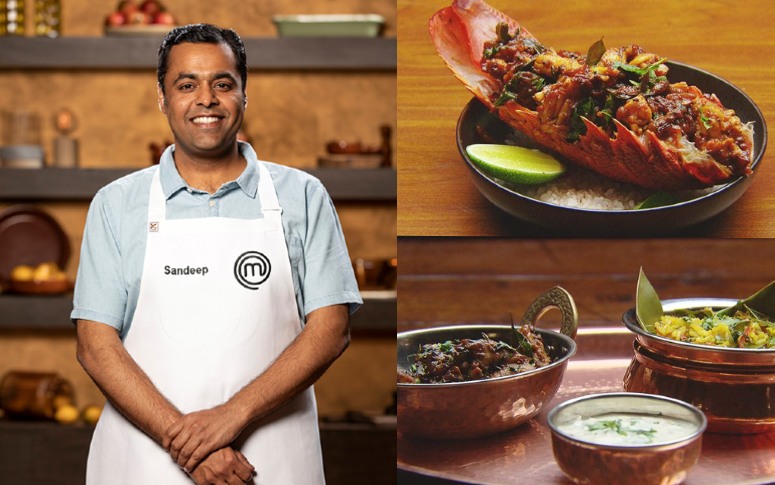 If you're an ardent fan of MasterChef Australia, you may already be catching up on the latest season on Hot Star just like I am. From the auditions of MasterChef Australia Season 11 to the most recent episode, I'm stoked about Sandeep Pandit making it to the top 24. Born in Kashmir, brought up in Bengaluru and a citizen of Australia since 2016, Sandeep entered the audition round with a smashing curry thali in which Kashmir's Rogan Josh was the highlight.

Considering his Indian roots, it doesn't come as a surprise that Sandeep decided to start off the competition with curry but it makes me wonder, is he following in the footsteps of last season's MasterChef Australia winner Sashi Cheliah? And, with Sandeep's curry streak continuing into Week 4, can he continue relying on curry to take him further in the competition?

This is what other fans of MasterChef Australia are wondering too. Let's find out why the internet is complaining about Sandeep cooking too many curries on the cooking reality show.

It all started when this IT project manager-turned-MasterChef Australia contestant showcased his confidence with spices in the mystery box challenge during the Legends Week. He wowed the judges and Rick Stein, the legend himself, with a flavourful yet simple tomato curry along with a basil laccha paratha. It was touted as a spiritual moment for Sandeep who welled up in tears and joined his hands when he was lauded with appreciation. "Cooking is inspired by the idea of India," the 37-year-old from Victoria told This is what other fans of MasterChef Australia are wondering too. Let's find out why the internet is complaining about Sandeep cooking too many curries on the cooking reality show

The internet was abuzz when Sandeep cooked lemon rice, lemon pepper chicken and raita for an immunity challenge against Andy Allen, MasterChef Australia Season 4 winner. That's when viewers first raised the question, why Sandeep is cooking only curries and not experimenting with other cuisines?

Here's a look at some of the scathing comments and conversations on social media about Sandeep's curry journey on MasterChef Australia Season 11 so far:

Question: how can you be a "Masterchef" if you just know one type of cuisine? Shouldn't it be diverse? #masterchefau

I know this is going to sound mean spirited but I want Sandeep to lose otherwise we are only encouraging his behaviour of only ever cooking one dish ... #masterchefau

Meanwhile, there were some viewers of MasterChef Australia that sided with Sandeep's curry decisions:

Although cooking the Lemon Pepper Chicken dish along with Lemon rice won Sandeep the immunity pin in the Secret's Week with a perfect score of 30/30, it only escalated the doubts of viewers because it was the third time he was making curry!

Crediting the immunity pin to former MasterChef Australia contestant from season 1, Poh, Sandeep referred to her as his secret weapon and revealed that he had been looking up to her as a mentor.

When he was in India, Sandeep would spend hours watching MasterChef Australia and Poh's Kitchen, he revealed in an interview with Ten Daily. "Poh's Kitchen is one of the shows that I used to love watching in India. She has a much uncomplicated approach to cooking, she's a chef but she's not chef-y and that's what I love about her."

When Sandeep made masala lobster (smoked in fenugreek and ghee) on the current season of MasterChef Australia, he received praise from Gary Mehigan who said, "The angels are singing somewhere?" As he dishes out some immaculate curries, he keeps rising as a star for the judges but that doesn't seem to be enough to impress fans of the cooking reality show.

In the most recent episode, Sandeep made a crab curry but this time smartly refrained from using the word 'curry' and called it sauce instead. It was the Cracking Mystery Box Challenge for which he chose to crack a coconut and shank the crab.

Now, you might say a curry and sauce are two different things which I totally agree but then mysteriously, even the judges paused and did not give away the word 'curry' while speaking to Sandeep about the dish. So, the pause said it all.

After the episode, when Sandeep spoke to Ten Daily, he said, "I definitely want to do something for Indian food, I want to be able to change the perception that people have towards Indian food, it's not just about curries." So, let's hope we see more of Indian food and not just curries from Sandeep in the upcoming episodes of MasterChef Australia 11.

All you need to know about Sandeep Pandit

Sandeep lived in Srinagar before moving to Bengaluru when he was 8-years-old. Even as a kid, Sandeep wouldn't step out of the kitchen and that's when his grandmother knew she had to start teaching him hacks around the kitchen.

This is not Sandeep's first time in front of the camera. When he was in Bengaluru, he even participated in the first ever Indian Idol in 2007. "I used to sing for my engineering college band, it was a good experience but I didn't make it past the first round," Sandeep told TV Week. In 2016, work brought the IT Manager to Australia. His long-term culinary dream is to "open a food stall selling Indian BBQ meat cooked over coals and biryani dishes" he told newidea.com.