A Quick Guide To Consume Fresh Turmeric Before The Season Ends 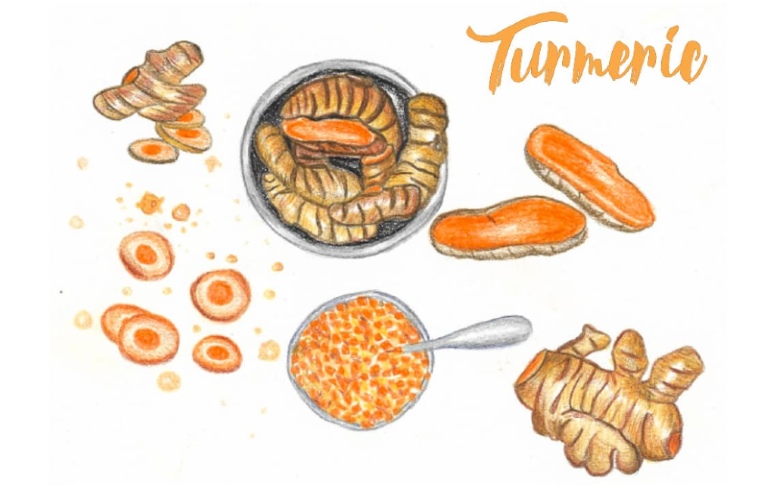 What comes to mind when I say, turmeric? My grandmother's yellow tainted finger tips from peeling off the skin of the turmeric while making an aachar. And having said that, turmeric has been a part of Indian culture for eons now; & the use of this spice can be traced back to Ayurveda. So it is safe enough to say that we've been eating it & using it for various purposes since times immemorial. To further stress upon the importance of turmeric, it is a versatile ingredient used in Indian curries, that complement vegetarian, seafood & poultry dishes & is liberally used to make pickles too! Apart from eating it; when I was little, I still remember my mom pressing a pinch of turmeric on a fresh wound to stop the blood flow and clean an injury. If I had a cold my grandmother would make some warm turmeric milk or water to ease off my congestion.

Turmeric was not just used to treat wounds due to its anti-sceptic properties but was (and is still) used in masks for a glowing skin. This reminds me of one of the most essential "Haldi" ceremony held in the Hindu wedding ritual; the sole intention of the ceremony being to provide the necessary glow on the skin of both, bride & the groom.

Also Read: How To Spice Up Your Meals With Turmeric

Adapting this traditional Indian spice, in the recent years, turmeric has become a ‘go to spice / health remedy’ for everything; which is exactly why it’s so amusing to see it being mention in several international trend reports since 2017. Be it in beauty, health care or food, turmeric and its benefits seem to be in the spotlight. Drawing from the fact that the western culture is taking more interest in the traditional form of medicine like Ayurveda, the sales and popularity of turmeric seems to be on the rise. Apart from these obvious benefits that all Indians know about, thanks to our mothers and grandmothers, turmeric is the reason for a good skin health that so many of us possess. It is now common to find golden latte (which is also popular as turmeric latte/ or what we in India call, Haldi Doodh) at cafes all over Europe! Turmeric, also known as curcumin in medical sciences, is not only an anti-oxidant and anti-inflammatory spice but it helps in prevention of heart disease, helps fight depression & aids in better sleep. Such a powerful spice with so many health benefits can only mean that consumption of Turmeric must have increased.

So, in an attempt to increase the consumption of such a beneficial spice I decided to talk about one of my favourite ways of consuming this spice. In its fresh form! Now, we mostly consume this spice in its dried powdered form (which comes in a beautifully bright yellow colour). Although, there is no data to prove that eating fresh turmeric or Kacchichi haldi or Oli hald (as typically referred to in Marathi) is better than consuming it in a powdered form. However, during winters, fresh haldi is available in all local Indian markets and devoured in various forms across households in the country. Now it is common knowledge that immunity levels drop during the winter months and this spice can be just the thing to brighten up a lacklustre stamina.

How does it taste?

Fresh turmeric has an earthy and peppery taste and looks very similar to ginger. So the best way to eat it, if not for directly eating cut roundels, is to pickle it.

How to consume fresh turmeric?

Make a fresh batch of turmeric pickle or Haldi Ka Aachar and its bound to be a hit with the family. Haldi Aachar goes well with Parathas and Theplas (a Gujarati flat bread made with fresh fenugreek leaves) or just with dal chawal. Another way to use fresh turmeric is to grate it on any salad. Not only will it colour your food but also perfume it in a spicy peppery way. Turmeric is also added to several curries (just like ginger is) in South East Asian Cultures. Several communities in West India use fresh turmeric in dals and lentil soups too. Another excellent way to consume fresh turmeric especially if you are sick is to make Kadha. The easiest way to go about the recipe is- Boil fresh turmeric till it gives out all its colour add grated ginger and spices like clove and cinnamon that also boost immunity and you will be sipping you way to better health. Turmeric Lemonade or Turmeric Latte are also options. A simple lemonade can not only look beautiful but become so much healthier if fresh turmeric is grated in the beverage. Combine all the above ingredients.

Leave it aside covered for 2-3 days before consuming.

Store it in the refrigerator for up to 2 weeks. Let me tell you that if you want to indulge in the freshness of this beautiful spice in the raw form, now is the time as the season is about to end. Come summers and it'll be off the markets & can have the exact opposite effect on the body. So, make yourself some turmeric pickle now & enjoy!