An Open Letter in Defence of Chakka aka Jackfruit 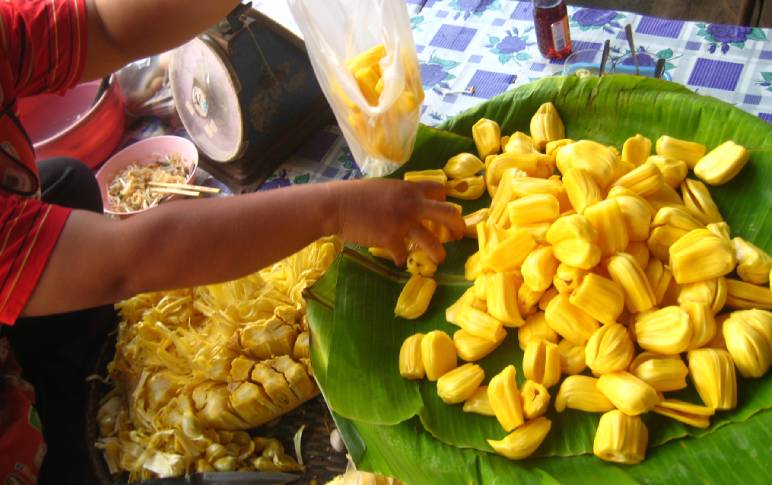 Summer is fondly called the ‘chakka-manga’ season in Kerala, to celebrate the bounty of jackfruits and mangoes. Late March to June is the annual period when Malayali households feature trips to (and from) houses of relatives, neighbours and friends, in cars, buses and cycles, for the spiky, hedgehog-like chakka. 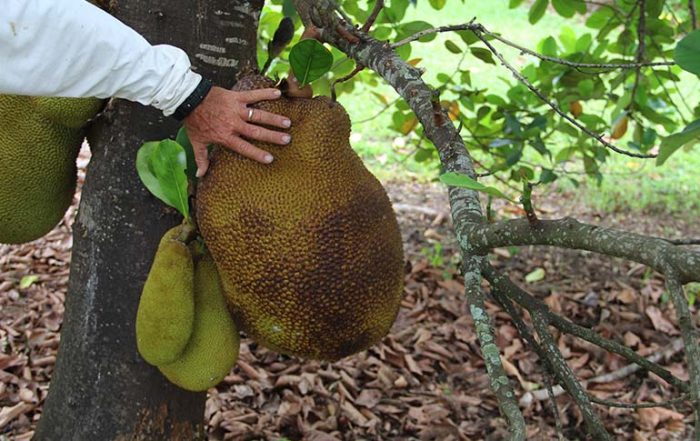 The next step after acquiring the jackfruits from their trees, locally known as plavu, is to gather help to cut the fruit. Prepping is nearly a whole day’s work. Old newspapers are laid out on the kitchen floor, well-oiled knives are kept handy, and a bowl of oil is stowed to dip hands in. Women and men alike squat on low wooden stools to conquer the oblong fruit which leaks a sticky white fluid as soon as it is cut into. 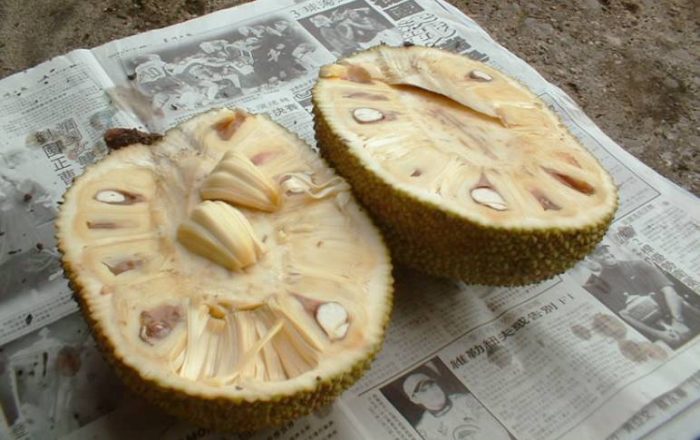 Separating the yellow pods within is a tedious and monotonous task, but the best conversations happen over the chakka-slicing ritual in Malayali homes. It is the time for gossip, getting distracted by the news clippings on the old papers and exchanging recipes. Did you know the papery cover of the seeds, usually discarded, could be salted and fried? This was a tip shared by my grandmother this year.

The morning’s cutting ceremony is followed by a hearty lunch where chakka is the showstopper. The afternoon menu would surely feature chakka vevichathe, cooked raw jackfruit, nestled in a coconut paste with curry leaves and green chillies. Nothing better than a piping hot, red fish curry to go with it. 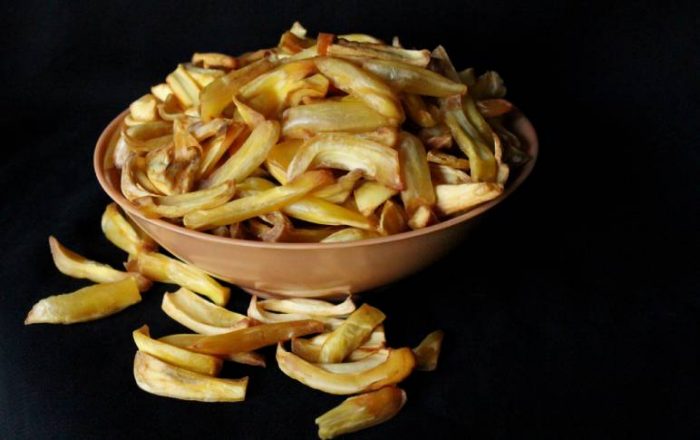 Some of the raw fronds are sliced thin and fried in coconut oil, with a hint of turmeric, and salt. These golden chips are stored in big steel containers. The seeds, chakka kuru, are left to dry in the sun, the skin is then removed to reveal a woody, rustic interior. These dried seeds can be stored for months, pressure cooked, then spiced and fried in coconut oil, or sautéed with mustard, shallots, chillies and grated coconut. The chakkakuru-manga curry, made from jackfruit seeds cooked in ground coconut paste with raw mango, is a staple curry for rice this season.

Also Try: Check out this kathal sabzi recipe in Marathi!

The ripe fruits are a favourite too, with a strong smell that invites visits from neighbouring houses to claim a chunk. The wobbly, orangish-yellow flesh is eaten, after peeling off the white threads that wrap it. It has a stringy, spongy texture with a honey-like sweetness. Chakka varattiyath is the most popular method to store the fruit for later consumption. It involves long hours of continuously stirring the ripe, gleaming fruit in ghee and jaggery, until a black mass separates from the sides of the wok on fire; an almost meditative, soul-searching ritual. 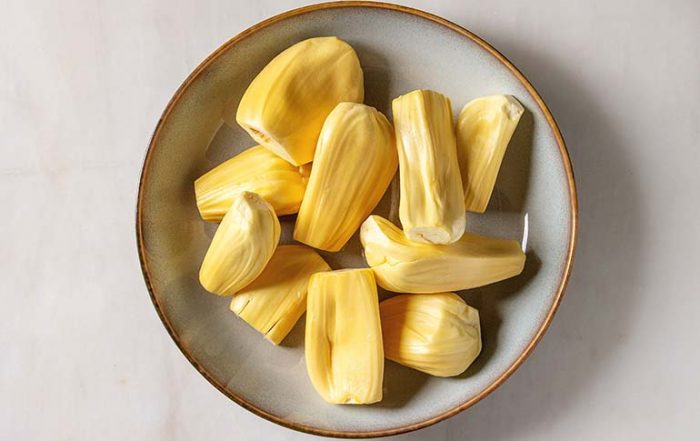 Jackfruit derives its name from the Malayalam ‘chakka’ which was recorded as ‘jaca’ by the Portuguese who invaded the western coast of India. The fruit is known by different monikers in the many states of India – chakka, palappazham, enchor, kathal and phanasa to name a few, with an equally enticing spread of jackfruit preparations made with local spices.

The north of India specialises in unripe jackfruit cooked with browned onions, and sometimes tomatoes. In West Bengal, jackfruit is called gaach patta which means ‘mutton that grows on trees’. Beef, pork and mutton are cooked with jackfruit and ample masala for meat lovers. Not to forget kathal pulao, long grain rice cooked with chopped jackfruit, garnished with fried onions and mint leaves, served with raita on the side. There is even a liquor made from jackfruit, brewed and served in earthenware, by the women of Tripura.

Also Try: Get a taste of jackfruit with this kathal biryani recipe 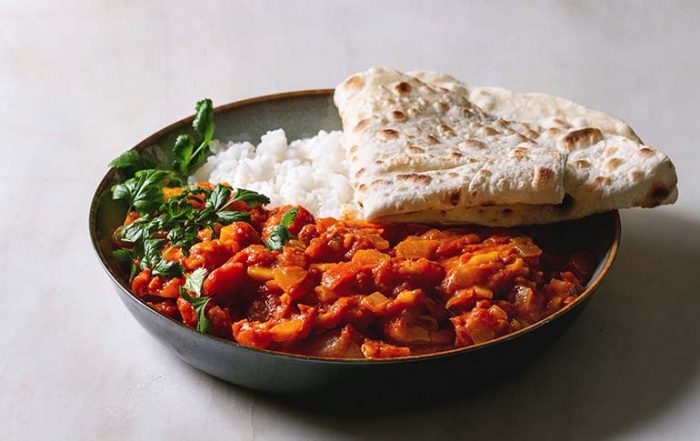 Jackfruit Curry with Rice and Roti

Jackfruit cultivation in India goes as far as 4000 BC. Ibn Battuta called it the best fruit of India. Poems have been written, with mentions in Sangam literature and Jataka Tales. The fruit is enjoyed in sweet and savoury dishes in Bangladesh, Thailand, Vietnam, Indonesia and the Philippines. April marks the New Year (Vishu) in the south Indian states, and the jackfruit holds an esteemed position as a symbol of prosperity for Vishu kani aka the first sight on New Year’s Day to kickstart a fabulous year.

Since our voluptuous beauty was only recently inducted into the vegan trend in the western market, ‘five years worth’ is all there is to this super fruit, slandered with the title ‘ugly duckling’ by The Guardian. Colonial history repeats itself with white people appearing as saviours, of the indigenous food culture. The essence of jackfruit lost in Starbucks wraps and tinned produce might give rise to ill-informed pieces such as Zoe Williams’, Jackfruit is a vegan sensation - could I make it taste delicious at home?, calling the state fruit of Kerala and Tamil Nadu, and the national fruit of Sri Lanka and Bangladesh, a “triffid” and “pest-plant”, and overstepping the mark by suggesting we ate it “because we had nothing better to eat”. 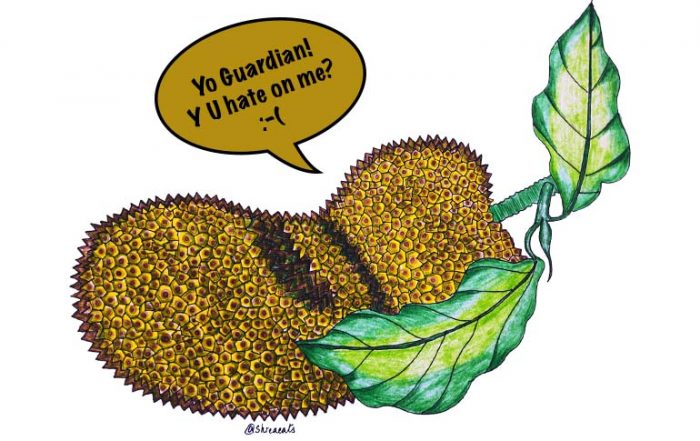 A simple explanation to Zoe’s baffling allegation that jackfruit tastes nothing like crab or beef is – that’s because it is neither! Forget the Tabasco that the West is religiously forcing as an accompaniment. Instead, try ripe jackfruit bulbs with rice flour, jaggery and coconut, steamed in fragrant bay leaves; juggle the hot bundles to avoid burns, as you serve them onto plates. Sit around and share stories. Our jackfruits grow wild, land with a thump; we lug them to our newspaper-smitten kitchen floors, sharpen our knives and get on with our day.

(Resh Susan is a Mumbai-based writer. She eats words, cooks stories and indulges in photographs. She is known as @thebooksatchel on Twitter.)